BAFANA Bafana’s toothless finishing again let them down in a 0-0 opening Confederations Cup draw against Iraq at Ellis Park last night, while coach Joel Santana’s defensive tactics in the first 60 minutes of the game are set to be panned by the critics.... 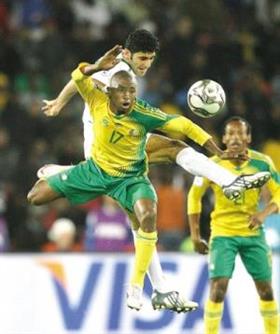 BAFANA Bafana’s toothless finishing again let them down in a 0-0 opening Confederations Cup draw against Iraq at Ellis Park last night, while coach Joel Santana’s defensive tactics in the first 60 minutes of the game are set to be panned by the critics.

With a capacity crowd cheering them on in a phenomenal atmosphere, and having been through a three-week training camp, the odds were stacked in South Africa’s favour.

In a freakish miss, Bafana, finishing the game all over the Iraqis, were desperately unfortunate not to score an 86th-minute winner when goalkeeper Mohammed Kassid missed Siboniso Gaxa’s cross and Katlego Mashego’s header came off the back of Parker’s legs on the goal-line, to be cleared by the defence.

Despite the result, it’s not all doom and gloom for South Africa. There are two games to go and New Zealand’s 5-0 thrashing at the hands of Spain last night means a win for Bafana against the Kiwis, in their next game in Rustenburg, is likely to be enough to reach the semi-finals.

There was promise in the South Africans’ second-half performance, and Bafana were well-organised and technically far superior to the Asian champions. But surely a new game plan will need to be implemented by Santana if the hosts are to beat New Zealand.

The formation of three central defenders in Aaron Mokoena, Matthew Booth and Benson Mhlongo and two defensive midfielders (Macbeth Sibaya and Kagisho Dikgacoi) left Teko Modise, the lone creative player in midfield, isolated in attack in the first half, where South Africa just did not probe enough behind the Iraq defence in the final third.

With the Iraqis also using five defenders, sitting back and spoiling, the game was crying out for more creative players to be added alongside Modise, but Santana made his first change when Mashego was introduced in a straight swap with Terror Fanteni in the 76th minute.

Steven Pienaar was left on the bench, Santana said, because he had missed three training sessions during the week due to an ankle injury, and was not fully fit. Pienaar was given only eight minutes as a substitute for Bernard Parker and was immediately influential.

Santana said he had been surprised by how defensive Iraq’s approach was.

“Everybody has his own opinion after the game,” the coach said. “If you look carefully at the game, I think we played well. We controlled the game but could not score.

“We played with safety and security, and in the end introduced two substitutes to try to break the deadlock and should have scored three goals.”

Iraq’s best period of the first half was in the opening eight minutes, culminating in midfielder Karrar Jasim’s long-range effort that went comfortably into the arms of Itumeleng Khune.

But that was the visitors’ last shot on target. Bafana began to dominate possession with crunching tackles in the midfield, though they lacked a final pass.

In one superb build-up, Dikgacoi’s crossfield pass set Parker free to feed Macbeth Sibaya, whose shot from the edge of the area was driven narrowly wide.

Modise showed some world-class touches, but with the playmaker isolated, chances were all too scarce.

Terror Fanteni’s header in the 72nd minute was just over the bar. Mashego was through in a one-on-one with Kassid, but could not pass the keeper.

Parker shot tamely again after turning in the area in the 79th, and Kassid held the ball, before the striker’s interception stopped what looked like Mashego’s certain winner.