Bafana turn on the charm

BAFANA Bafana players Steven Pienaar, Macbeth Sibaya and Benson Mhlongo were a picture of composure as they answered questions in a relaxed manner, with maturity, intelligence and humour at a press conference at Orlando Stadium yesterday.... 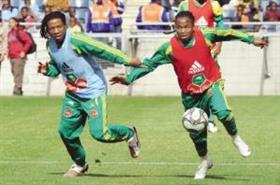 BAFANA Bafana players Steven Pienaar, Macbeth Sibaya and Benson Mhlongo were a picture of composure as they answered questions in a relaxed manner, with maturity, intelligence and humour at a press conference at Orlando Stadium yesterday.

In a mark of the magnitude of the occasion as South Africa embark on hosting the 2009 Fifa Confederations Cup, starting with tomorrow’s opening ceremony at 2.30 pm at Ellis Park followed by the opener between Bafana and Iraq at 4 pm, there was a large turn out of foreign and local press at the brie­fing.

The Confed Cup will be competed in by the hosts, Brazil, Italy, Spain, Egypt, Iraq, New Zealand and the USA. President Jacob Zuma has said he wants to see the trophy remain in South Africa.

Asked if this has added to the pressure, Pienaar replied: “Not really. You watched the training today and the guys are more relaxed.

“You have to go into the game relaxed and playing without pressure, and get a result. We’ll talk on the 28th and hopefully the trophy will stay here.”

After a disastrous year at Borussia Dortmund in the Bundesliga, Pienaar has resurrected his career at Everton and, in the past season, has come close to fulfilling the potential he displayed in a promising start to his career in Europe at Ajax Amsterdam. This included being probably Everton’s best player in their 2-1 FA Cup final defeat to Chelsea at the end of the season.

“I had a good season. I hope I can carry on where I left off in the last game for my club [the cup final] and also do well for my country. It’s about time now,” the skilful and tireless midfielder said.

Bafana’s choice of training venue for their last three sessions at the now modern, all-seater, 40 000 capacity Orlando Stadium, the traditional home of South African football, has proved a masterstroke. Yesterday’s session was watched by around 1 000 school children who screamed on every touch.

Asked what effect this had on the team, Sibaya replied: “It’s not just about the fans, it’s also about the history of the stadium. We feel great to be in Orlando Stadium.

“Saturday’s friendly was my second time playing at this stadium — I played there with Jomo Cosmos reserves — and it was very exciting to meet Poland in a newly-revamped Orlando Stadium.”

Mhlongo is now an experienced international player, who has been recalled to the national team following a rejuvenation of his career since moving from Mamelodi Sundowns to Orlando Pirates at the beginning of last season, where the defensive midfielder captained the Buccaneers to the Premier Soccer League runners-up spot.

The sturdy midfielder, after a storming game in the 1-0 warm-up victory over Poland on Saturday, is set to return to the bench thanks to the return to fitness of Teko Modise.

“The team has been together for a while and I only recently came back after 11 months, and I’m there to give my contribution, even if it’s five minutes,” Mhlongo said.

The players were asked to describe their feelings on the eve of one of the biggest moments in South African football history.

Mhlongo said: “Personally it’s an honour. This is the right time for a player to showcase his talent and show what he can do against the best in the world. It’s a dream come true.”