Bafana’s Santana back on track after convincing win

BAFANA Bafana’s new coach, Brazilian Joel Santana, showed signs that he is a far more relaxed man after Saturday’s 4-1 thrashing of Equatorial Guinea in an African Nations Cup qualifier at the Super Stadium in Atteridgeville. 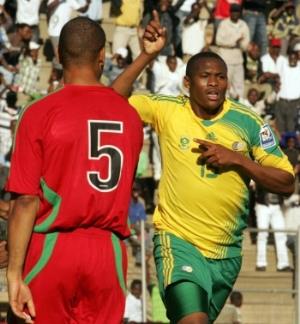 BAFANA Bafana’s new coach, Brazilian Joel Santana, showed signs that he is a far more relaxed man after Saturday’s 4-1 thrashing of Equatorial Guinea in an African Nations Cup qualifier at the Super Stadium in Atteridgeville.

The opponents may not have been of the highest standard, but Bafana registered a morale-boosting victory in impressive fashion. They bounced back from their disjointed 2-0 defeat against Nigeria in their Group 4 opener last weekend, and Santana’s first game in charge.

Santana, who walked into a pressure situation following the resignation of countryman Carlos Alberto Parreira in late April, can now go about his job under friendlier scrutiny than what he has received thus far. At the post-match press conference the coach also showed some of his uncomplicated charm.

“I think the team played very well because they put the ball down, playing good passes.”

Santana displayed a bright sense of humour despite his still very tentative grasp of English. “It was good to win today,” he said. “Good for the coach, for the players, good for the newspapers.

The coach said he still needs much more time before Bafana are anywhere near the standard he requires them to be at.

“We need more time for preparation. To work on more good crosses, corners, counter-attacking. But in football you can give instructions in training, and when you get to the match it is not the same.

“The players are nervous. After we went 2-0 up today the team relaxed, took more touches and more time on the ball.”

Bafana’s midfield were the stars of the game, with the rock-solid anchor combination of Kagisho Dikgacoi and Macbeth Sibaya providing the foundation for the victory. Impressive Dikgacoi scored his first two international goals in his tenth international.

The pair provided the cover for the creative pairing of man-of-the match Teko Modise and Steven Pienaar to roam freely and spread telling passes.

While Equatorial Guinea were slightly disappointing for a team with a 76th ranking, Bafana dispatched of their opponents in a clinical fashion that had shades of the 3-0 friendly victory over Paraguay at the same venue in March.

Dikgacoi opened the scoring in the tenth minute with a screaming shot from 27 metres that took a slight deflection after good work by Modise and Tsepo Masilela down the left. In the 35th minute, Surprise Moriri scored from the right of the area with a looping header that went in at a far post, after Modise’s chip from the left was only half cleared.

Pienaar’s superbly measured pass from right midfield in the 64th minute put Moriri through on the left, who squared for Fanteni to volley into an open goal.

Senegalese referee Diouf Samba, who had a shocker, awarded a penalty to the visitors with 12 minutes left when it appeared Itumeleng Khune had clearly won the ball at the feet of Epitie Dyowe, and Juvenal Edjogo scored to the left of the Bafana goalkeeper to make it 3-1.

In injury time Dikgacoi headed in from close range in a goalmouth scramble.

The only real negative for Bafana was the injuries to captain Aaron Mokoena and Bevan Fransman, with neither of the two starting central defenders finishing the game. Fransman landed on his neck after going up for an aerial ball in the 25th minute and was replaced by debutant Bongani Khumalo, while Mokoena went off with a shin injury with 11 minutes to go.

With Bafana still facing two more qualifiers on the next two weekends, against Sierra Leone away then at home, the team could face a sudden shortage of central defenders.

“It could be a big problem because I already had one central defender [Nasief Morris] out, and now I could have two more,” Santana said.