CLIMBING Africa’s highest mountain — Kilimanjaro — has been done before, but Matt Botha and his four team-mates plan to make things difficult for themselves. 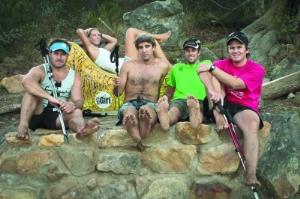 CLIMBING Africa’s highest mountain — Kilimanjaro — has been done before, but Matt Botha and his four team-mates plan to make things difficult for themselves.

They are going to do the 65km trek to the top of the Kilimanjaro on the Old Mutual Barefoot Kili Expedition Zola Budd style, all in aid of charity.

They have been preparing for this gruelling expedition by going barefoot everywhere to toughen up the soles of their feet. The pads under their feet have to become thick and hardy to withstand extreme temperature changes and also the everyday sharp objects on the ground.

The expedition was due to occur in December, but had to be cancelled because Botha, originally from Pietermaritzburg, almost cut his foot in half by standing on a piece of glass which sliced through his tendons as well. But since then he has recovered and it is all systems go.

The climbing team comprises five members including Botha. The others are Andrew King (a Durbanite), a remarkable endurance athlete who insists on doing outrageous masochistic endeavours, Hedley Young (also from Durban), whose previous athletic achievements were described as follows: “I broke my neck at 10. I once tried to walk home from Pietermaritzburg to Durban after a big night on the town and I own a herd of goats.” He is the wild card obviously.

Camilla Howard is the only true Capetonian in the group and a natural athlete. She’s a gourmet cook with a giant heart. She has already done a charity tuk-tuk race across Sri Lanka and is full of energy.

Durban resident Clyde Barendse is an average sports athlete who tends to leave training to the last minute. He’s artistic and a philanthropic lounge lizard.

They are relying on the advice of Sean Disney the lead guide to get them to the top and the medical assistance of Dr Ross Tucker and the rest of their back up team.

One of their biggest battles will be getting their feet to warm up in chilly conditions. The danger of poor circulation is that they could suffer from severe frostbite. They have had numerous blisters and dirty feet and endured strange stares as they have walked barefoot while doing their normal routines.

Now it is crunch time for the five adventurers known as the “barefoot impis”. They fly out from Johannesburg on Monday to Nairobi and then begin their adventure. Botha who was previously involved in Bob Skinstad’s charity Bob for Good — a programme to supply school shoes to needy children — says he has always wanted to do adventurous things with a purpose.

He said: “It is great to do adventurous things, but when you know that the outcome will directly have a positive impact on other peoples lives, that really makes it worth it.” He and the team visited the Red Cross Children’s Hospital during the week and they were all moved by the work done by the nurses and doctors.

“It is incredible to see how they save lives and the love and dedication they put into their work. More money and resources will help a brilliant team help more children who need their skills,” said Botha.

Sean Disney, a veteran mountain climber who has summited many of the world’s highest mountains will be leading them up the mountain.

Dr Tucker, the doctor who has been training them, will be treating their foot injuries. They are hoping the climb will take eight days, slightly longer than an average climb because they will have to climb, stop and then climb ahead with shoes to acclimatise and then return to sleep.

Then they will climb to the same spot the next day barefoot. “Basically we will be climbing the distance twice.” It will be one step for them and one giant step for the Red Cross Children Hospital. Ralph Mupita, CEO Old Mutual Life &Savings, said 100% of all money donated will go directly to the specified projects and programmes at the hospital, the sole beneficiary of the initiative.

To donate money to the cause or to follow their adventure go to : www.barefootimpi.org.za