Beware the charms of the alluring pink Pompom

An alluring alien weed is invading KwaZulu-Natal grasslands and, if left unchecked, could pose a threat to the environment. 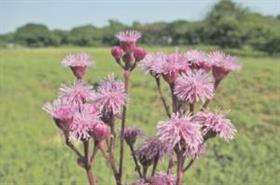 An alluring alien weed is invading KwaZulu-Natal grasslands and, if left unchecked, could pose a threat to the environment.

The Department of Water and Forestry has called on the public to be on the lookout for the “pink menace”, the Pompom weed (Campuloclinium macrocephalum), and not to be deceived by its beauty and take it home. In a media statement, Working for Water (WfW) programme spokesman Theo Rossouw said it belongs to the daisy family, and has “striking pink powder-puff-like flowers”, which entice people to pick them and thus spread them.

The fight against the invasive alien plant was launched in 1995 and is spearheaded by the WfW programme and administered through the Department of Water Affairs and Forestry. Rossouw said the weed is rapidly becoming one of the most serious threats to the conservation of South African grasslands. “It originates from South and Central America, but we don’t know when or how it got into South Africa.”

The first record of its presence was in the then Transvaal in 1962, and since then it has spread to KwaZulu-Natal and other provinces. “The weed produces huge amounts of wind-dispersed seeds every summer and has underground tubers that enable it to survive fires and the dry season. This, in addition to its tolerance of a wide range of soil and moisture conditions, makes it the perfect invasive weed.”

The plant blooms during the period from December to March.

Several strategies have been implemented to create awareness of the pink flower. Roadside billboards warning about the plant will be erected in 2008 to draw motorists’ attention to the threat posed by the plant. “In KwaZulu-Natal all known infestations of the weed have been treated with one of two registered herbicides for Pompom in SA.”

The prospects for the war to control Pompom weed in South Africa are encouraging.

Rossouw said biological control is the final strategy for sustainable control. This involves the introduction and release of effective yet safe insects or disease-causing organisms to reduce the invasiveness of the weed.

This strategy comes after extensive research done in Argentina and Brazil to find natural enemies. Researchers are expected to submit applications for permission to release a rust fungus by the end of 2008 and for insects in 2009.

KwaZulu-Natal has a limited population of Pompom and should be able to contain spread and possibly even eradicate some infestations.