A massive train derailment at midday on Saturday has blocked the main Johannesburg to Durban railway line, derailing 42 trucks of a 44-truck train and spilling its cargo of manganese ore, which was destined for export. 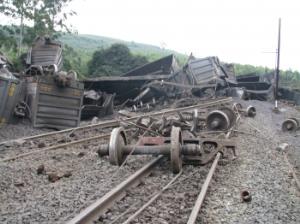 View accident slideshow below this article.

A massive train derailment at midday on Saturday has blocked the main Johannesburg to Durban railway line, derailing 42 trucks of a 44-truck train and spilling its cargo of manganese ore, which was destined for export.

The crash occurred in the upper Boughton area. A massive derailment took place further down the same track in January 2004.

The train driver died at the scene, but it is believed that the conductor managed to jump clear of the wreckage. He was taken to hospital with slight injuries and released yesterday.

Train trucks lay in disarray packed together in a concertina effect in some places. In places, the train line was torn up.

Transnet spokesman Sandile Simelane said yesterday that engineers and technicians were at the scene assessing the damage and that site clearing had begun. “Fortunately the crash site is easily accessible for equipment to move the trucks.”

He said the manganese is not harmful to the environment and that contingency measures were not necessary.

Simelane said normal operations on the main line were affected, and it is expected to be closed for a week. Trains are being re-routed through Vryheid in the meanwhile, he said.

Sources at the scene were reported to have said that the train’s brakes began failing at Balgowan.

“To say the accident was as a result of brake failure is based on pure speculation, because only an investigation will reveal the cause of the accident,” said Simelane.

Concern by residents that the manganese could land up in the nearby Dorpspruit were allayed yesterday after ecologist Jake Allerton said that although one should never be too complacent, because the manganese was in rock form it is unlikely to cause harm. “We have also had one of the driest Mays in years and the river is some way away.”

People at the scene reported seeing fist-sized rocks of manganese scattered 100 metres in front of the first truck, catapulted by the force of the crash.

The mangled wreckage of the train was cordoned off from the public. The press were not allowed near the cordoned-off area and requests for a tour of the site were yesterday refused by Simelane.