GENEVIEVE Tanya Detering and Nicole Davidow’s dream has a title, it’s called CamelThorns — the title of a short film they have produced that works as a teaser for the full-length feature they are hoping to make.... 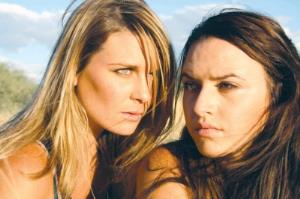 GENEVIEVE Tanya Detering and Nicole Davidow’s dream has a title, it’s called CamelThorns — the title of a short film they have produced that works as a teaser for the full-length feature they are hoping to make.

“We’ve known each other since schooldays in Namibia,” says Detering. “We always had this dream that one day we would make a movie.

“The film is partly inspired by our own friendship.”

Starring Davidow and Klara Mudge, CamelThorns is the story of two young women who go on the run in Namibia after falling foul of the law.

It was shown last week at an international film festival held at the Fern Hill Hotel, Howick.

“It’s a Thelma and Louise-inspired story,” says Detering, who wrote and directed, “and it’s a road movie.”

Davidow adds: “The short is one of the bumps on the road.” This particular bump features a tense encounter with a racist farmer.

After school the two decided on a gap year abroad. “We went to Scotland,” says Detering.

“We wanted to learn how to be independent. And we went to Scotland because we wanted somewhere that was a complete contrast to Namibia.”

Both women are passionate about film, and gap year over, Detering enrolled at the New York Film Academy while Davidow began a degree course in film at the Anglia Ruskin University in Cambridge. She was active with the University’s theatre society and has recently starred in two Australian shorts,The Count and The Germish Date.

Detering graduated from New York Film Academy with several shorts to her credit and went on to work for independent film producer Amy Hobby (Secretary, Hamlet) before landing the job of on-set assistant to director Doug Liman, maker of The Bourne Identity, Mr and Mrs Smith.

He was then busy with the up-and-coming Fair Game starring Sean Penn and Naomi Watts. “Being a director myself it was great to be able to watch him at work so closely,” says Detering.

Meanwhile, Detering was working on the screenplay for CamelThorns. She and Davidow pitched the idea to Doug Liman, “and he liked the idea”.

He encouraged them to shoot a sequence from the film as a promotion tool and offered to be the executive producer.

“These days it’s a good idea to show people something instead of expecting them to read an entire script,” says Detering.

“We didn’t want our film to be just another script on the shelf.”

Their film’s title is fortuitously similar to that of Camelthorn Brewing Company, who came on board as sponsor for the promotional short along with the Namibia Film Commission and Media Logistics Namibia.

This enabled them to make the short with an all-Namibian cast and crew.

Both are determined to showcase the talents and the landscapes of Namibia on the big screen.

“Namibia hasn’t produced it’s own feature film, but overseas companies are frequently using the country as a location and pretending its somewhere else,” says Detering.

“The Flight of the Phoenix was shot there, with Namibia doubling as the Gobi Desert.”

Now Detering and Davidow are busy promoting CamelThorns at festivals and film marts around the world as “a Namibian film in the making”.

So far the short film has won a Merit Award at the Los Angeles Cinema Festival of Hollywood and Best Film of the night at the Short Cut Film Night in Melbourne, Australia.