Bird project gets to120 schools 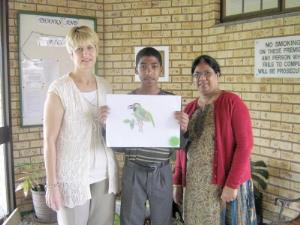 For the past six years, Birdlife Trogons and NPC Cimpor have been running an inter-schools art competition in southern KZN.

To date more than 120 schools have taken part in the competition and an estimated 150 000 pupils have been exposed to several endangered birds.

This year the competition took place in October.

Primary schools are sent a résumé of endangered birds that pupils then illustrate.

Schools do their own judging and forward their best entries to Birdlife Trogons.

Judging is done by independent judges and cash prizes sponsored by NPC Cimpor are given to the winners.

Nearly R80 000 has been allocated to the schools so far.

The competition has become a regular feature on the Birdlife Trogons calendar and it has sought to include more rural schools to ensure that the message of conserving South Africa’s endangered birds is spread far and wide.

Chairperson Barry Porter stressed the importance of the campaign, saying, “It is the most significant form of social responsibility that Birdlife Trogons is involved in.”