IT was to be a night of celebration, a Test to remember as Ireland opened their new Aviva Stadium, but the Springboks played the role of party-poopers to perfection and surprised friend and foe with the intensity of their forward power in a 23-21 weekend win in Dublin.... 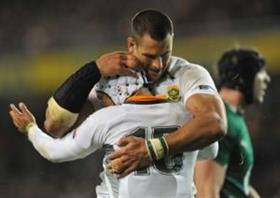 IT was to be a night of celebration, a Test to remember as Ireland opened their new Aviva Stadium, but the Springboks played the role of party-poopers to perfection and surprised friend and foe with the intensity of their forward power in a 23-21 weekend win in Dublin.

Coach Peter de Villiers saw the victory as vindication that the Boks’ game plan, built on the traditional strengths of South African rugby, is the way forward for the World Cup champions.

“That’s the way we play. For us to stick to our plan was heartwarming,” he told reporters.

But Victor Matfield, the captain on the night, said the conservative tactical path taken by the Springboks on the night was dictated by the conditions, a wet Dublin night and a slippery surface.

“You couldn’t keep the ball in hand, even if that was your plan, because the weather didn’t allow that,” he said.

The Springbok forwards, led by the towering Matfield in the lineout, were strong and influential, bossing the Irish around their new home ground and keeping Brian O’Driscoll’s strong back division under wraps.

The strong Bok drive, the use of their big ball-carriers on the inside channels and the tactical kicking was rewarded by territory and points while keeping the Irish on their heels.

Matfield, leading the Boks in place of the injured John Smit, was delighted with the win.

“We always had belief in ourselves. I think it’s really a team with a lot of talent. Every time you put that jersey on, it’s a Springbok team. It doesn’t matter if people write you down or up. You need to perform. It’s a proud Irish team, they showed it the way they came back. But our guys showed their character and that character came through at the end.”

O’Driscoll admitted that Ireland’s tactical approach was wrong on the night.

“Only the 30 players who were out on the field really know just how difficult those conditions were to play in,” he added. “We wanted to play a wide game and test them, but the conditions didn’t make it possible, and maybe we didn’t play the right game for the conditions.”

De Villiers defended his decision to clear his Bok bench when they were controlling the Test, but they then conceded two late tries — and a yellow card for Bryan Habana — in a hectic final 10 minutes to almost draw it.

“It’s a long tour for us and we have three Test matches to come,” he said. “You just never know when we are going to have to rely on those other players, who are all talented and can give us something on attack. They do give us different options and we would like to see those options,” said De Villiers.

Springbok doctor Craig Roberts said yesterday that there were no injuries in the squad “apart from the usual bumps and bruises” as the team departed for Cardiff, where they will be joined by utility back Frans Steyn.

“The only concern before the match was Jean de Villiers and we managed him and replaced him after 60 minutes as planned,” said Roberts. “He came through the game well.”

“The players worked hard all last week and they took that on to the field,” said Peter de Villiers yesterday.

“We focused on certain areas and it was pleasing to see the results. It was a new-look team, but they responded well to the occasion and the tricky conditions and delivered a great performance.

“But that’s behind us now and it will mean nothing when we meet Wales on Saturday. We’ve already switched our focus to them and the different type of challenge they present.”

The Springboks ended a 10-year wait for a win in Dublin and now take on Wales at the Millennium Stadium in Cardiff on Saturday before Tests against Scotland (November 20), England (November 27) and a match against the Barbarians on December 4.