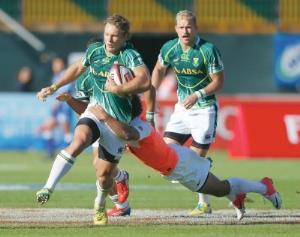 DUBAI — The Springbok Sevens scored three wins yesterday to top Pool D and book a quarter-final spot against Kenya at the Dubai Sevens, Round Two of the HSBC Sevens World Series.

South Africa outscored powerful Samoa by four tries to one in their final pool encounter to register a comfortable 26-5 win and book a clash with Kenya, nowadays coached by former Springbok Sevens coach Paul Treu.

In their two other pool matches earlier yesterday, the SA Sevens side beat Argentina 17-7 and then swept aside Russia 34-5.

The first half against Samoa was a bruising affair, but South Africa just managed to clinch the lead at half time thanks to a converted try by Sampie Mastriet. Samoa hit back almost immediately to make the half-time score 7-5.

South Africa started the second half in much better fashion and Branco du Preez scored their second try after a good scrum effort. Werner Kok then crossed the line for their third try and his second of the tournament after a mistake by Samoa near their try line.

Speedster Justin Geduld, one of several replacements in the second half, scored their fourth try from a quick penalty tap to put the game out of reach for Samoa, who last year won the title after defeating New Zealand in the Cup final.

SA Sevens captain Kyle Brown said afterwards: “It’s much tougher these days. You have to punch all the way through and win that last game in your pool.

“We’re just so happy to be in the quarter-finals and we’ll give it our all tomorrow.”

Against Russia, powerful running forward Jamba Ulengo scored twice and was joined on the scoresheet by Du Preez, Phillip Snyman, Mastriet and Kok, who dotted down for his first ever try in the World Series.

In their opening match, SA scored three times and Argentina once, although the South Americans enjoyed greater territorial advantage for much of the match.

Ulengo got the SA Sevens on the scoreboard after he raced away from the defence to score in the corner.

Veteran forward Frankie Horne doubled the score to 10-0 a minute later after he powered his way over the try line.

Argentina struck back in the second half with a converted try to reduce the difference to just three points at 10-7. However, clever play by Chris Dry saw SA stretched their lead to 17-7 after he took a quick penalty tap to score under the posts.

New Zealand are currently leading the World Series standings after their success at the Gold Coast in Australia.

Round 3 of the HSBC Sevens World Series, the Nelson Mandela Bay Sevens, takes place next weekend in Port Elizabeth.