A LOVE of children and a shared Christian faith have brought together two women from different continents. Together, they are helping to breathe new life into Bonginkosi, one of Edendale’s longest-running pre-primary schools.... 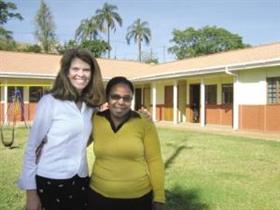 A LOVE of children and a shared Christian faith have brought together two women from different continents. Together, they are helping to breathe new life into Bonginkosi, one of Edendale’s longest-running pre-primary schools.

Zodwa Molefe, a teacher from Edendale and Kristi Passaro from North Carolina are part of a team which recently celebrated the completion of a spacious and cheerful-looking new school building for Bonginkosi.

Previously located for over 30 years in a small mud-and-wattle house down the road, the new school sits proudly above the main Edendale Road.

Molefe, a qualified teacher in early childhood development, has taught at the school for 15 years and is now head teacher. She says she is delighted with the new facilities which makes the job of teaching and managing the school’s 46 pupils a great deal easier.

Bonginkosi (”praise the Lord” in Zulu) is the only pre-school in its ward offering critical foundation-level education.

Co-founded in 1972 by Edendale teacher Daphne Tshabalala and Pietermaritzburg resident and active Christian Barbara Davies, Bonginkosi was initially conceived of as a feeding centre to improve the lives of undernourished children in the area.

In 1977, the school became part of the Christian evangelical organisation African Enterprise and significantly expanded its scope, providing Edendale children at the height of apartheid not only with a safe learning space, but with food, clothing and basic medical care.

With the introduction of government school feeding schemes after 1994, the focus has shifted to educational preparation of the children for primary school, and Christian ministry.

The Passaros — Kristi and her businessman husband Paul — who relocated to South Africa from the United States in 2006, nurtured a vision to upgrade the Bonginkosi facilities after a mission visit to South Africa in 2005.

A mother of three young children who holds a doctoral degree in public health, Kristi serves on the management committee of the school, which also has its own board of trustees. Exposed to a number of worthy projects during her mission visit in 2005, she said that being a mother, the pre-school took hold of her heart most firmly.

Many of the children who attend the school have lost at least one parent. Those who are unable to afford the modest fees are covered by scholarships.

Back home, Kristi and Paul took responsibility for most of the fundraising in the United States, while African Enterprise focused on raising funds in the United Kingdom. “We are working on building partnerships with South African funders,” said Kristi.

The school employs five people, including Molefe and one other teacher. There’s a full-time cook to prepare breakfast and lunch for the children, and a live-in caretaker who helps to tend the school’s fledgling food garden.

Kristi said the levels of co-operation the project received from the local architect, Banbric Building, estate agent Mandla Sikhakahane and attorneys Nosie Mgojo and Yuri Maharaj enabled them to get the building up and running within months. “It’s a true team effort,” she said.