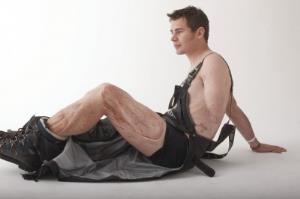 “WHEN people ask me if I want my leg back, I say ‘no thanks’. I have a wonderful life, despite having only one leg.”

This was what one of the South African soldiers who enlisted with the British army said about the leg he lost after an explosion in Afghanistan.

Former corporal Rory Mackenzie (31) is one of two South Africans who displayed their amputations for the first time in a book by musician and photographer Bryan Adams.

Titled Wounded: The Legacy of War, the book has been released overseas and will be on sale in South Africa this month.

Mackenzie, who hails from Krugersdorp, and Jaco van Gass (27), who is from Middelburg in Mpumalanga, are the only two South Africans in the book.

Van Gass lost an arm in 2009 in a rocket-propelled grenade explosion. His left leg was also badly injured, but was saved.

Both soldiers have since overcome the trauma of their severe injuries and have crossed the Atlantic Ocean in a row boat, and walked with other wounded colleagues to the North Pole.

Adams, who is better known as a musician, said about his book, written with journalist Caroline Froggatt, that people are vaguely aware of the bad side of a war, but few get to see the scope of the physical injuries.

“This shows the human side of the war and tells the story of a group of British veterans who still have to battle with disabilities long after the war. It is impossible to show the deeper emotional scars,” Adams said.

Mackenzie was deployed as a medic in a armour-plated vehicle when it rode over a massive explosive device in 2006.

The violence of the explosion ripped apart the soldier who sat across from Mackenzie, while Mackenzi had to undergo numerous operations and face the prospect of suffering from health problems for a long time.

He said he decided to take part in the book project because the income will be donated to five organisations that support British war veterans.

“The army has got only about R96 million for prosthetics for all veterans with amputations above the knee.

“The British army has, in the past 10 years, had 6 500 disabled veterans. People do not realise that for every soldier killed in a war, four to five of his or her comrades in arms are left disabled,” said Mackenzie, who has been discharged from active service in the British army and now works as a motivational speaker.

He is also the manager of the Row2Recovery team, which offers soldiers the chance to race against able-bodied soldiers across the Atlantic Ocean.

“I will get married next year in June.

“Life is treating me well. I am luckier than most,” he said.