Booth: Media got it wrong

MATTHEW Booth has hit back at the media for making a mountain out of a molehill over an alleged bonus dispute between Bafana Bafana and Safa ahead of the team’s Confederations Cup kick-off against Iraq at Ellis Park on Sunday. 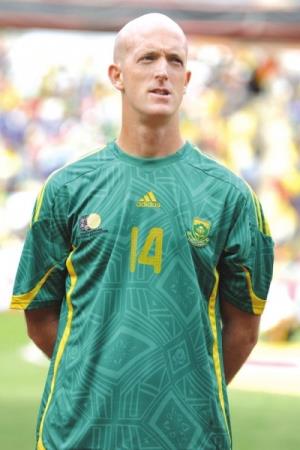 MATTHEW Booth has hit back at the media for making a mountain out of a molehill over an alleged bonus dispute between Bafana Bafana and Safa ahead of the team’s Confederations Cup kick-off against Iraq at Ellis Park on Sunday.

At a press conference following yesterday’s closed training session at Orlando Stadium, Booth said the dispute was resolved last week and labelled the website Kickoff.com irresponsible for breaking the story on Tuesday.

Reports have said the Bafana players asked for a combined R30 million in bonuses if they win the Confed, and were granted R14 million. Today the Sowetan’s front page headline was “Shame on you Bafana”.

“I think something needs to be rectified,” Booth said. “We’ve been labelled over the past day as being greedy, unpatriotic and holding the county to ransom. And that couldn’t be further from the truth.

“At no stage during our negotiations did we threaten to go on strike or not to play. I think it’s too high a stage to even say that and don’t think any of the players would want to do that kind of thing.

“And this dispute was actually resolved last week. I think from Kickoff.com this was mischief-making of the highest degree and it’s put us back a long way psychologically. The front page of Sowetan today was also unbelievable.

“The spirit is high, but the guys are definitely thinking about it. It was very sad because we’ve been together for three weeks working helluva hard.

“We then had to have six of our colleagues leave us. Then we had a good result against Poland and the mood was up, and we’re struggling with this now.

“It didn’t have to happen this way and I think the players have conducted themselves in an excellent manner.”

Bafana coach Joel Santana praised his players for keeping their minds on the job. “I believe the problems are being resolved and the players are experienced and very responsible and disciplined,” he said.

“The atmosphere in the camp has been one of friendship. We have an objective, which is to have a superb Confed performance. I believe the situation will be resolved within two to three days and we will remain harmonious.”

Tonight the squad would see the video of Iraq in their 1-1 friendly draw against Poland, Santana said, and tomorrow “I will start from a new position”.

“The team today had good positioning and passed well, as we did against Poland. In this training we had the ball more, but not the same marking [as with three defensive midfielders].

“Maybe I will play two attacking players in midfield against Iraq, I don’t know yet. We will train with different options in the next days and discuss it with players, and by Saturday we will know.”

“They are big players with three or four who have good quality on the ball. They have one good, fast striker.

“But I expected them to be dangerous. Bafana had the same experience going into the game against Poland, and all the other warm-up games at home. And here in South Africa I think my team has played well.”