THE hockey at the Five Nations tournament reached a new level yesterday with a breathtaking exhibition of all that is best in the game. 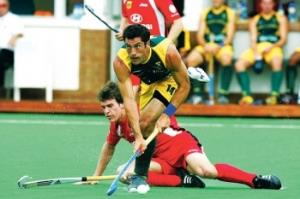 THE hockey at the Five Nations tournament reached a new level yesterday with a breathtaking exhibition of all that is best in the game.

And in the late game, a spirited, tenacious South Africa, as if celebrating their exciting new sponsorship from the Resolution Group, led 1-0 against world champions Germany until three minutes before half-time. Sadly, the enthused crowd were not going to witness a big upset by the world number 13s as the classy Germans came back strongly to win 3-1 in the end.

The SA match started with a bang when Jan Marco Montag flashed a drag flick that cannoned into the upright. Four minutes later SA captain Bruce Jacobs picked up Marvin Bam’s cross from the right, trapped the ball and with a short grip slammed it into the backboard behind goalkeeper Christian Schulte.

South Africa’s 1-0 lead stayed that way until three minutes from the break when a series of German raids on the circle and a flurry of penalty corners ended in Oliver Korn netting the equaliser. The match became heated soon after the opening goal and remained that way for the duration, as the clearly rattled Germans clashed with the South Africans on a constant basis. Montag collected 10 minutes in the sin bin, while the world class Tibor Weissenborn was in the thick of all the heated moments.

However, SA came off second best as two players were also sent to the bin — Ken Forbes after he had words with umpire Francisco Vasquez of Spain and Lungi Tsolekile after Aussie umpire Kieran Deland took umbrage at a bad tackle.

The SA problem of not getting a clean first touch to the ball continued to plague them, particularly up front, and much of the good build-up work was undone. Forbes, goalkeeper Chris Hibbert and fellow defender Eric Rose-Innes were towers of strength at the back while Jacobs and Austin Smith fought for the ball with gusto in midfield.

Border’s Julian Hykes made his first Five Nations appearance after injury, but possibly the biggest flare-up followed the combative Andrew Cronje’s clash of sticks in a tackle situation with the Germans. To the naked eye it appeared Cronje, who played well, had been wronged, but that didn’t stop the entire German team surrounding him and a minute after the game re-started, Austin Smith collected a torrent of abuse from the wily Weissenborn.

Sebastian Draguhn picked up the other German goals with low penalty corner drag flicks, as SA sadly lost much of their structure and purpose towards the end, in contrast with the one-minded purpose of the first half.

Tournament director Pete van Zyl, who has spent 20 years officiating at top hockey events all over the world, described the Aussie versus Spain match as one of the finest, while fabulous Spaniard Santiago Freixa unleashed a corker of a reverse-stick strike from a difficult position that left Kookaburras goalkeeper Daniel McPherson rooted to the spot, not having moved a muscle, such was the ball’s velocity. It was a goal that had Van Zyl and seasoned observers at international level scratching their heads in trying to find anything better in long careers watching the world’s best.