A LOCAL businessman who was recently duped out of over R90 000 has called for banks to make a solid effort in protecting their big clients and bringing criminals to book.... 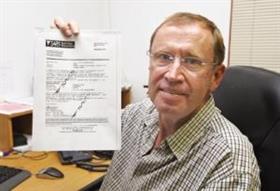 A LOCAL businessman who was recently duped out of over R90 000 has called for banks to make a solid effort in protecting their big clients and bringing criminals to book.

Mike Hellens, owner of Mikros Traffic Monitoring KZN, a traffic engineering business in the city, said he has always maintained a longstanding attitude of being above reproach in his business dealings. So when his accountant approached him about a phone call she had received earlier that day from someone believed to be from the South African Receiver of Revenue (SARS) claiming R97 000 had erroneously been paid into his business account, he wanted to do right.

“My accountant received a call on May 21 and was advised that the business had overpaid for VAT for April in the amount of R6 500. They said the Receiver of Revenue’s accounting office would refund the money, but they also pointed out that R97 386,76 had been erroneously deposited into our account and it should be paid back into a Standard Bank account,” said Hellens.

Unwilling to do anything with his eyes closed, Hellens requested written confirmation, which was received within an hour of the initial phone call. “The letter was professionally done. If you look here you can see it carries all the SARS information, their letterhead and SARS’s water marks.”

The letter even went as far as to say that the money should have been paid to another business, TLB Towers.

As a precaution, Hellens called the number provided to verify the information. A Jeff Walters, the person signed off as the contact person in the letter, answered the phone as a worker in the VAT procurement office of SARS. Hellens claims Walters was very professional, even assuring him that he shouldn’t pay the money until it had reflected in his account.

When that happened later that afternoon, Hellens deposited the money the next day into the Standard Bank account provided, now confirmed to have been set up fraudulently.

Bank records now show that a cheque from SARS had been deposited on May 20 from Gandhi Square in Johannesburg, a day before Hellens’s business received the call. However, Hellens was only able to detect the problem four days later. His bank statement reflects minus R97 386,76 from a SARS transaction, after the cheque proved to be a dud.

“I have been in business for 20 years and I have never lost a cent as a result of fraud and corruption. It is something that is very hurtful for business because R90 000 is not something you make overnight.”

“We are an honest company. We paid VAT religiously and you never imagine that something like could happen,” Hellens confessed.

He said his reason for coming forward was to make other businesses aware so that they don’t fall into the same trap.

“I feel banks are not playing ball. There is no awareness and alerts warning the public of these threats. And what makes me mad is it is difficult to get co-operation once the damage is done.”

Hellens claims information like how someone can access his banking details and how the fraudsters were allowed to open a bank account without all the Financial Intelligence Centre (Fica) Act regulations being followed, has not been forthcoming.

He still does not know if Walters really works for SARS since they have not bothered to get back to him.

Last week, Hellens recovered R6 900 of his money, despite being told that all the money had already been withdrawn when he called Standard Bank. He was required to open a case before he could be assisted and all correspondence with Standard Bank needed to be done through his bank, Nedbank.

“There is no confidentiality and the fact that they can access our banking details is frightening. It was cleverly done and carefully thought out, but it doesn’t say much for the banks security and the Fica Act.”

The Fica Act was signed into law in 2001. The act and a Counter-Money Laundering Advisory Council was established to combat money laundering activities, fraud and to protect the consumer against identity theft. Legally, banks and other financial institutions are required to verify the physical address of their clients before a new account can be approved.