BEACH volleyball may not be one of the country’s power sports, but Durban beachfront had enough of a buzz yesterday to suggest that this week’s FIVB Durban Open will attract large numbers. Dancing girls ... 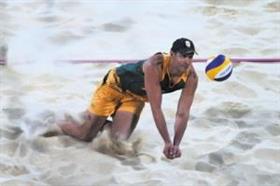 BEACH volleyball may not be one of the country’s power sports, but Durban beachfront had enough of a buzz yesterday to suggest that this week’s FIVB Durban Open will attract large numbers.

Dancing girls, a healthy crowd and teams from all corners of the globe formed part of the qualifiers yesterday, with competition set to start this morning. It is the first time that Durban is hosting a leg of the Open series since 1996, and the city has secured the event for 2014 and 2015 too.

Thirty-two doubles teams in each of the men’s and women’s competitions will be slugging it out for their share of the $75 000 (R779 340) prize money allocated to each gender. “There are six courts, including the centre court, which can accommodate around 1 800 people,” competition director Gershon Rorich told The Witness yesterday.

“The biggest thing for us has been the organisation. Accommodation for all of the teams and their coaches has been an expense that we have had to deal with, but preparations have run smoothly.”

Rorich added that he was expecting a large crowd to attend over the course of the weekend, and that there would be no cover charge.

Semi-finals and finals were due to take place on Sunday — the final day of the tournament. But due to Nelson Mandela’s funeral taking place then, Saturday will now be the final day of action. As a result, floodlights will be erected around centre court so that extra matches can take place tomorrow night.

Twenty-four teams will emerge from the eight pools to take place in a knock-out competition.

There was bad news for South Africa yesterday as the women’s teams of Sheana Abrahams and Natasha Strydom, and Anneta Frederikson and Gadija Jappie, both lost their qualifiers yesterday to ensure that they will take no further part in the competition.

But all is not lost for the host country, which still has representation — two teams in the women’s category and three in the men’s.

Grant Goldschmidt and Freedom Chiya, as well Jerome Fredericks and Leo Williams, will take on the world’s best men, while Palesa Sekhonyana and Randy Williams; and Judith Augoustides and Kirsten Pocock are tipped to be strong contenders in the women’s section.

President of Volleyball South Africa (VSA) Tubby Reddy said, “We expect to draw record crowds at this event. Beach volleyball is one of the fastest growing sports in South Africa and across the world. Its popularity was confirmed at last year’s London Olympics where it made headlines around the world and took its rightful place in the top 10 of the best Olympic moments on the International Olympic Committee [IOC] website.”