Calls for jobs and end to poverty 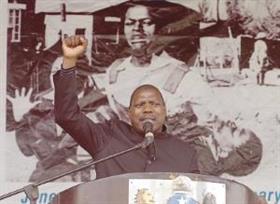 Both the African National Congress and the Inkatha Freedom Party deli­vered messages centred on youth development at separate rallies.

ANC Youth League president Julius Malema urged President Jacob Zuma to set aside 60% of the 500 000 jobs he has promised.

“The president said he will create 500 000 jobs by December this year … 60% of those who are going to get those jobs must be the youth,” he said to a roar from excited young people at Huntersfield Stadium in Katlehong, south of Johannesburg.

Among the unemployed at the stadium was Thabang Mofokeng from Sebokeng in the Vaal Triangle, who was hoping to get a job this year as he has been sitting at home since he matriculated in 2004. “We are tired of hearing speeches which mean nothing and we hope that, for a change, they [the government] can be true to their word and implement everything that they promise.”

With him was Khonzakwakhe Buthelezi from Kagiso. Although employed, Buthelezi said lack of education has sunk the country’s youth deeper into poverty and perpetuated the cycle of poverty.

He said young people end up doing “mediocre” jobs like those their parents had done. “We really hope they [the government] deliver on their promises, because we need better jobs. Our income doesn’t enable us to buy houses because we couldn’t afford going to tertiary [institutions], and we end up relying on the government,” said Buthelezi.

He was among hundreds of people who were bused into Katlehong from townships as far afield as Kagiso.

Also hoping Zuma will deliver on his promises is Siyabonga Dlamini (18), a grade 12 pupil from Katlehong.

“I’m hoping to study a degree in accounting next year, but I don’t have the means. My parents are unemployed and I hope my big brother gets a job before the end of this year so that he can pay for my tuition fees in case I struggle to get a bursary.”

Malema also got the thumbs-up for slamming the Umsobomvu Youth Fund, saying it has focused on advancing “their girlfriends and boyfriends” while neglecting the youth.

In his speech Malema slammed the two bodies for having isolated themselves from poor communities. He urged Nyda to set up offices in townships and rural villages, “instead of in Midrand”.

IFP Youth Brigade chairwoman Pat Lebenya-Ntanzi urged Nyda to pay attention to young people in rural areas. “Today, many youths still face the same problems as the generation of 1976,” she said in a statement.

Youth must connect with 1976

KWAZULU-NATAL Premier Dr Zweli Mkhize has called on the youth of the province to be part of government programmes that will better their lives.

Mkhize was speaking in Kokstad yesterday at Youth Day celebrations.

He said that even though Youth Day is meant to continue the fight of strengthening democracy and to honour those who died fighting for the liberation of the country, the government wants it to be a tool for encouraging the youth to benefit from programmes to improve their skills.

Mkhize said the day is also important in terms of helping the youth understand their history and how democracy was achieved in the sense that the youth of today should connect with the history of those who died in June 1976.

“… you do not have to go into exile before you achieve [opportunities] … the only struggle for you is to empower yourself through education,” said Mkhize.

He added that youth should involve themselves in agriculture and use the land that they fought for.