Captain Rehab and the sardine run

TRAVEL brochures. You have to love them. In travel brochures, it never rains and everyone behaves properly... 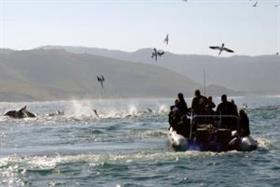 TRAVEL brochures. You have to love them. In travel brochures, it never rains and everyone behaves properly. The one my family and I looked at in 2005 was no different. Sharply written with stunning photography, it invited readers to experience the sardine run up close by booking a place on a chartered boat. This sounded like a fantastic way to experience one of KwaZulu-Natal’s most spectacular yet elusive natural phenomena. We were sold. What the brochure didn’t tell us about was Captain Rehab.

All life-jacketed up, a group of about 12 of us had been waiting in our boat to launch for about half an hour. We had been told the captain was running late. A guy in baggies and a T-shirt made his way through the shallow water to the back of the boat where I was sitting. His hair was uncombed and sticky, and he had a coat of sweat on his face like thin varnish. I told him not to worry about giving us a push off as we were still waiting for the captain. “That’s me, boet,” he said, stretching out his arm, “give me a hand up.”

I helped pull him up and he sort of stumbled to the front of the boat. “Good morning everyone! My name is Mark, and I am your captain,” he announced jovially, as if this introduction deserved a round of applause. “We need to wait a bit; it’s a tricky business getting out past the breakers,” he explained. “Then why aren’t you wearing a life jacket?” someone asked. “Because I don’t need one. I have been working these waters for over five years and haven’t flipped a boat yet,” he boasted.

We looked around at each other, not sure what to say. Just our luck, I thought to myself, of all the boats working the sardine run, we wind up with Captain Rehab. But it was too late to change our minds, Rehab gunned the motor and we were skidding over the incoming swells out to sea. A few minutes later, we were part of the sardine run.

For the sardines it’s a run, but for the thousands of predators that follow them, it’s a massive mobile seafood buffet. A squadron of gannets was diving nearby. Wings tucked against their sides, they dove metres below the sea’s surface to pluck out their unsuspecting prey. Many had already gorged themselves and were bobbing over the swells like ducks.

Suddenly, a pod of about 50 dolphins appeared, smiling and cartwheeling as if welcoming us to this grand occasion. Rehab ran the boat alongside them, and a pair started playing with us. They would disappear under the boat and reappear on the other side a few seconds later, then drop back, only to appear magically again in front of us.

Unlike Moby Dick’s captain Ahab, Rehab presented a curious mix of petulance and swagger rather than any real menace. Another charter with two young guys at the helm cruised up to us to exchange notes. “Have you seen any whales?” my wife Shelley shouted across to them. “Not yet, but we saw two sharks a bit further back,” someone shouted back. They moved off, waving as they went. Rehab turned to us: “New kids on the block,” he explained shaking his head, “haven’t got a clue.”

We were all so busy looking into the middle distance for whales that we almost missed them — two Zambezi sharks cruising past, about 20 metres from the boat. My son Francis saw them first and started shouting. Shelley spun her head around to see what Francis was pointing at, and her sunglasses, which were perched on top of her forehead, popped off and fell overboard. She reached over the side of the boat and tried to grab them, but they were already sinking. I shouted at her to let them go. Rehab stood up to see what was happening, lost his footing and stumbled backwards. He bounced against the inflated side of the boat and sprung back like a kid doing a trick on a jumping castle. Slightly higher and he would have flipped right out of the boat and quite possibly into a scene out of a really bad shark movie. But the swagger had been completely bounced out of him. Pale and shaken, he tried to gather himself. Someone started to laugh. It was just as well that our time was pretty much up. Sullen and uncommunicative, Rehab steered us back to shore. Of course, this all would never have happened in a brochure, but then again, what story worth writing about ever does?

• The True Stories winners have been announced and we will now be running the remainder of the semi-finalists’ stories.

PATRICK Makkink is a computer teacher at a city school. He is married to Shelley, a psychologist who works at the University of KwaZulu-Natal. They have three teenage children, Thomas (17), Francis (15) and Josie (13). Patrick enjoys writing short stories, poetry and occasional columnist-at-large articles in his free time.