Former President Nelson Mandela rubbed shoulders with many celebrities during his lifetime. Those who met him took to Facebook, Twitter and Instagram to share their thoughts, feelings and memories following his death on December 5... 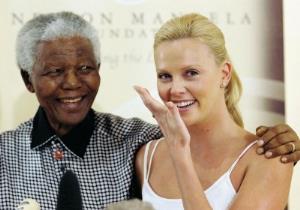 Former President Nelson Mandela rubbed shoulders with many celebrities during his lifetime. Those who met him took to Facebook, Twitter and Instagram to share their thoughts, feelings and memories following his death on December 5.

• Oscar-winning South African-born actress Charlize Theron: “My thoughts and love go out to the Mandela family. Rest in Peace Madiba. You will be missed, but your impact on this world will live forever.”

• Bono, the Irish rock star and anti-poverty activist: “It was as if he was born to teach the age a lesson in humility, in humour and above all else in patience. In the end, Nelson Mandela showed us how to love rather than hate, not because he had never surrendered to rage or violence, but because he learnt that love would do a better job.”

• Oprah Winfrey: “One of the great honours of my life was to be invited to Nelson Mandela’s home, spend private time and get to know him. He was everything you’ve ever heard and more — humble and unscathed by bitterness. And he always loved to tell a good joke. Being in his presence was like sitting with grace and majesty at the same time. He will always be my hero. His life was a gift to us all.”

• Veteran comedian and actor Bill Cosby and his wife, Camille: “Mandela surrounded us with his graciousness, care and respect after we lost our son, Ennis. Moreover, it was an honour to sit alongside him on the bed of his former prison cell; as he triumphantly spoke about his survival and the courage of his supporters.”

• Musician Paul Simon: “Mandela was one of the great leaders and teachers of the twentieth century. He conceived a model for mortal enemies to overcome their hatred and find a way through compassion to rebuild a nation based on truth, justice and the power of forgiveness. His passing should re-ignite a worldwide effort for peace.”

• Musician Quincy Jones: “Today, as it did while he inhabited our planet, Nelson Mandela’s spirit truly soars with the angels. It was a spirit born of a generosity, love, compassion and hope for mankind that may never exist at such a heightened level in any single human being again. One of the most profound honours that I have had in my life was to be able to call Madiba, my friend and brother.”

• Richard Branson: “Today we lost not only a great man; we also lost one of the world’s greatest leaders. Thanks for your inspiration, friendship & the joy you brought into our lives.”

• David Beckham: “We have lost a true gentleman and a courageous human being. It was truly an honour to have known a man who had genuine love for so many people.”

• Author of The Colour Purple, Alice­ Walker: “I am so happy that Nelson Mandela is at last truly free. I will wave to him as he transforms into everything around me and on into the cosmos. What a race to run, Life gave him. That he made it in so much beauty tells us who we are, and who we can be.”

• Johnny Clegg: “Nelson Mandela will always define a deep part of what and who we are as individuals and as a nation.

“It is difficult to separate the great journey to secure a democratic and non-racial South Africa from his personal qualities and character. For all South Africans he was the face and form of that voyage, particularly in the crucial decade of 1990 – 2000.

“It is the qualities of tolerance and forgiveness, however, which stand out as his lasting legacy as well as the way he used these to unite the country both during and after his presidency.

“With all our fellow South Africans we acknowledge with deep gratitude the debt we owe to this Man from Qunu, who bequeathed us this great country of promise. Today, although we grieve, we also proudly rejoice in his remarkable life, which we were privileged to share through extraordinary times.”

• Evita Bezuidenhout: “#ANC office in Heaven? Be on full alert! Someone is on his way to check the books! Geliefde Madiba RIP #Mandela.”

• Singer and actress, Mariah Carey: “My heart is breaking with everybody in the world, yet I’m feeling so humbled and blessed to have been in the presence of this magnificent soul… arguably the greatest hero ever to grace us. His sacrifice and gift to the world are incomprehensible.”

• Actor and director, Tyler Perry: “What a life, what a journey, what a man. Thank you for passing this way! God bless your resting soul!”

• Josh Groban: “We have lost one of humanity’s greatest treasures… I will never forget the lessons learned from him or his vision that lives on.”

• Comedian and actor, Eddie Izzard: “Nelson Mandela gives us a legacy that all of humanity can aspire to. Read his story for he might be the greatest person that has ever lived.”

• Justin Timberlake: “One of our GREATEST leaders… Thank you for BEING the true meaning of compassion. May you be at peace.”

• Lady Gaga: “It is such a sad yet beautiful moment that Nelson Mandela has passed. A time to celebrate him and remember his contributions to humankind.”

• Soul singer Aretha Franklin: “Most extraordinary was how he rose above his being imprisoned and exalted himself above apartheid and hatred to unite the country, an unbelievable example of humanitarianism and courage.”

• Ellen DeGeneres: “Today we lost the world’s greatest advocate for peace and change. Nelson Mandela was a hero to so many.”