Cheesy and predictable, but an entertaining rom-com

ONE can never judge a romantic comedy by its plot; we know the girl-meets-boy formula and the nothing-but-expected happy (cheesy) ending. ... 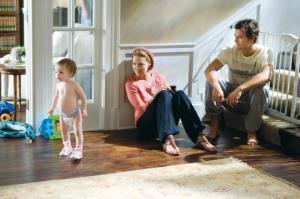 ONE can never judge a romantic comedy by its plot; we know the girl-meets-boy formula and the nothing-but-expected happy (cheesy) ending.

Life as We Know It is no different and follows the genre guidelines meticulously, but with some good laughs and great acting.

The lovers-to-be meet on a horrendous blind date, set up by their best friends, that never makes it to the restaurant.

Holly Berenson (Katherine Heigl) is the order-obsessed career woman in search of Mr Right (much as in Heigl’s 27 Dresses, The Ugly Truth and Knocked Up). Eric Messer (Josh Duhamel) wants to be a TV sports director and is the laid-back man-whore whose “hunkiness” melts women (and the gay neighbours) into puddles of stupidity.

Naturally they despise each other, but are forced to bear one another’s presence when their best friends wed … and then have a baby … and then die, naming this most unlikely couple, Holly and Eric, godparents, joint guardians of their most loved possession, Sophie.

As standard legal practice would have it, the two are asked to live together in the deceased friends’ house for Sophie’s benefit.

What follows is a somewhat realistic and humourous portrayal of two singletons’ sudden parenthood, with Eric frustratedly saying, while holding baby Sophie awkwardly, “Some chick says, ‘Aw, Messer, we can do it without a condom’, but I say no and I still end up with a kid!”

The unsleeping, nappy-changing, no-idea-what-to-do-with-this-crying-kid scenes are thin; however, with a strong chemistry between the two leads, the film allows for some poignant moments that save it from falling into the abyss of easily forgotten films.

The duo perform some great lines with brilliant comic timing, coupled with a few classic facial expressions from Duhamel, which makes the 114 minutes of screen time yawn-proof.

Despite its rom-com package of predictability, cinematic clichés, comic stereotypes and a handful of cheap jokes, Life as We Know It is entertaining and provides a guaranteed fun night out for fans of the genre. For others, it offers delectable eye-candy, if nothing more.