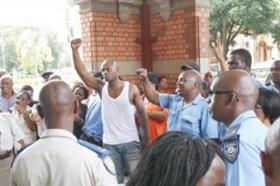 “I AM your commander in chief …”

Msunduzi Municipality manager Mxolisi Nkosi calmly said this as he read the riot act to striking workers who stormed the City Hall yesterday, demanding to see him.

He also threatened to quit his position if ever again he was treated this way, saying it was either him. “or those involved in such incidents” who will have to leave.

“I am your commander-in-chief and cannot be summoned by you to a meeting,” Nkosi said.

Traffic officers, municipal security officers and traffic wardens had demanded to see Nkosi after their management failed to honour a meeting scheduled for last week Friday.

Nkosi told them he hoped the incident would never happen again.

“I cannot be coerced to do things in a wrong manner and if this happens again I shall leave, or those involved in such incidents will have to leave,” he said.

Nkosi reminded them of a recent meeting with them at which he tried to understand the challenges facing not only their department, but all the municipality’s business units. “I also requested to be given time to come up with a comprehensive plan to sort out these challenges,” he said.

Nkosi told them he had met the departments of Human Settlement, Co-operative Governance and of Transport yesterday. He did so to address some of the very challenges that the strikers had raised.

Shop stewards said they felt management was not taking them seriously after not pitching for a meeting on Friday, despite having signed an acknowledgement that they would do so.

One told Nkosi at the City Hall: “It is not that we are fighting with the municipal manager.

“However, our concerns are that we find it difficult to work under these circumstances, so we thought it would be appropriate to approach your office in order for you to understand what conditions we work under.”

He said he and his colleagues wanted service delivery to be a priority.

“At this rate management just ignores pressing issues that directly affect services because they want to privatise jobs,” said the shop steward, who would not give his name.

They also questioned the policy of employing inexperienced juniors to act in senior positions.

“We have a budget allocation of R900 000 to fix security vehicles and more than R1 million to fix traffic department vehicles,” said another shop steward.

“But more than 50 vehicles are just lying in the workshop and they have not been repaired and that has a negative impact on service delivery.”

They also told Nkosi that in 2007, traffic officers had gone on the rampage, burning tyres, to protest waiting as long as 17 months for a response to their demands to be upgraded to a C2 level and to receive back pay.

“We as security also demanded to be graded to C2 accordingly in 2008, but we had to demonstrate before our demands were heard by management,”

“But we still have not been back-paid after four years.”

Other issues raised were the lack of working equipment such as radios, sjamboks, and pump-action shotguns.

They also aired their concern about what they described as “inconsistency in conducting disciplinary action against workers whom management favoured”.

They said some security workers were at the B1 grade, which was a breach of the policy as B2 grade was the entry level.

Nkosi told them they had given him a hostile reception and that he may seek advice to establish whether or not this was an illegal strike.

“Some of the issues that you have raised were raised in our previous meeting and they are not going to be solved today but they will be dealt with systematically,” he said.

Nkosi told them that the issues they raised were serious and that he would attend to their concerns, but he was unhappy with their manner of approach.