WHEN the odd rock rolls menacingly towards Emgodini, near Henley Dam, locals know that it comes from the cliffs above.... 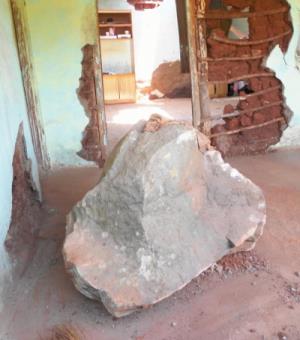 WHEN the odd rock rolls menacingly towards Emgodini, near Henley Dam, locals know that it comes from the cliffs above.

But they also believe that the cause of the falls is human actions.

People who recently settled on the ground above them have loosened the soil, causing the rock falls, they claim.

This week elderly Gladys Dlamini had a close shave when a large boulder crashed into her home, causing structural damage and breaking furniture.

“I was asleep and then I was woken by children screaming,” she told The Witness.

“Then there was a loud bang,”

“I became dizzy as I had been hit by a wooden pole that supports the roof.”

Her son, Musa, said his mother’s home was the third to have been damaged by a falling rock since inkosi Sondelani Zondi had allowed people to build houses on top the cliff.

“We were fortunate that everyone in the house escaped with only minor injuries,” said Musa.

“But the situation is making us live in fear that any day worse things could happen because this area has become unsafe as the rocks are now loose.”

He said people had returned there after having been evicted.

“When these people dig their drains these rocks become loose and the rains don’t make things any easier for us.”

Councillor Mercy Buthelezi said she had heard about the incident and would be visiting the area today.

With the help of municipal experts, she said, she would assess the situation and offer possible solutions.

She noted that people’s lives would continue to be at risk if things remained as they were.

Zondi said he had been told about the incident and had sent his induna to assess the damage.

He blamed the rockfalls on people being careless while excavating new sites and not considering those who lived below the cliff.