WITH only three major matches to report, the school’s match of the day is included here. It was expected that all three games would be close but only the match at Northwood was nail-biting. Maritzburg College and Glenwood both won their matches relatively comfortably. 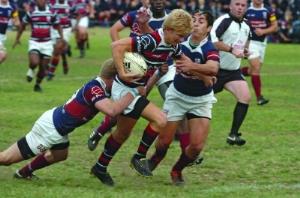 WITH only three major matches to report, the school’s match of the day is included here. It was expected that all three games would be close but only the match at Northwood was nail-biting. Maritzburg College and Glenwood both won their matches relatively comfortably.

Not many in the substantial crowd would have expected a try count of four to College with none by Westville. The defence by College must be the best in the province and in this game their confidence grew after scoring two tries in the first four minutes. Westville then had to attempt to play catch-up, but the College defence was too good.

College have promised but not often produced when on attack, but in this game there was good balance, accurate passes and good handling, all done at top speed.

From the kick-off, College maintained possession through five phases, and centre Thato Molelekoa went through a widening gap in the Westville defence to score a five pointer. Marcel Coetzee converted and with just 90 seconds on the clock, College were 7-0 ahead. Three minutes later, Jesse Kriel ran over 40 metres, stepping left and right, jinking his way between defenders and scoring under the posts. Coetzee had his second simple conversion and the Westville supporters were stunned with the scoreboard showing 14-0.

Westville then had some good possession and put College under pressure. Big tackles and well organised defence lines prevented Westville from crossing the try line and they had to resort to penalties for their points. At half-time the score was 17-9 with fullback Louis Snyman converting three penalties and Coetzee adding one just before the break.

College started the second half well maintaining forward movement and when wing Banele Ngwenya beat the defence down the touch line, he passed inside to Coetzee who went over for the third try. He added the two points and the score moved to 24-9 with 25 minutes remaining.

Kriel had some long touch finders which often got College out of trouble. With 10 minutes remaining College drove from a line-out and Jacques Conradie was driven over for College’s fourth try and the final points in the game.

This was the first game this season where Westville had not scored a try and was the first time that College has won so convincingly at Westville, since they became a rugby power in the province.

Glenwood looked more like the side that they promised to be at the beginning of the season. Coach Sean Erasmus had made some changes and this did improve their continuity. Visitors DHS, in this classic clash, did not turn up merely to make up the numbers but did surprise Glenwood at times.

DHS did well in the first half, despite playing into quite a brisk wind and had the better of field position, but did not look as accomplished with the ball in hand. There were some big tackles with DHS having to make many more than the home side.

Glenwood dominated the line-outs, while DHS had the better of the scrums. In the tight loose it was Glenwood that turned more balls over. Carel Swart and Rupert Kay did extremely well in this area.

After just 12 minutes it was Glenwood that had gone into an 11-point lead due to a try by wing Dylan Coulson sandwiched between two penalties by flyhalf Warren Potgieter. DHS did best when the ball was kept among the forwards and they made good ground with the pick and drives.

At half-time Glenwood led 17-3 after two further penalties by Potgieter with a penalty by DHS flyhalf Kurt Webster.

From the Glenwood kickoff, DHS took the ball up and then centre Le Roux van Zyl kicked a 45-metre drop kick to give his side six points. Webster then added another penalty five minutes later as the visitors dominated the early possession. Glenwood gradually got back on top. Eighth man Michael van Aardt, picked up from the back of an attacking scrum and drove to score the second try of the game. Potgieter converted and the home side led 24-9.

A good scrum by DHS, saw Van Aardt scrambling the ball out and it went down the line to Coulson, who cut inside through some poor DHS defence to score under the poles and again Potgieter added the extra points to make the game safe for the hosts. A last penalty by Potgieter made the final score 34-9.

Northwood’s superior kicking gave them an exciting win against George Campbell. With the latter scoring three tries to two they had much of the advantage in the match. At half-time the sides were locked at 7-7 with a try apiece.

The second half saw Campbell doing better in the tight exchanges and they scored another two tries to one by Northwood but the latter also converted two penalties for the one point win.

Two tries for Campbell were scored by flyhalf Mondli Nkosi and the other by Lester Mazibuko. Nkosi added two conversions.