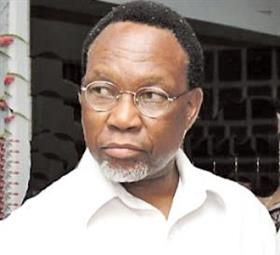 It would make sense from almost every perspective for President Thabo Mbeki to appoint Kgalema Motlanthe as a new deputy president of South Africa.

Such a move would come as a much-needed peace gesture from Mbeki to calm the political waters of the acrimonious power struggle in the African National Congress, which is beginning to threaten the economic interests and even the stability of the country.

It would provide a vital link between the two power centres of party and government that have emerged post-Polokwane, thereby reducing tensions and easing the way for a smooth transition to a new regime when the Mbeki era ends next year.

It would provide Motlanthe himself with cabinet experience in preparation for the key role he is certain to play in the future governance of this country now that he is deputy president of the ANC.

Not least, it would enhance Motlanthe’s status in the party and the country and so improve the chances of him, rather than Jacob Zuma, succeeding Mbeki as the next president of South Africa.

I have not in the past been a Motlanthe admirer. I saw him as a grey background figure without charisma or gravitas, who as chief executive of the ANC had allowed it to degenerate into an organisational shambles. But I have revised that opinion following Motlanthe’s performance at Polokwane, where he showed himself able to rise above the squabbling delegates and restore order when the conference threatened to run out of control.

He commanded attention. He was impartial and at times appeared quite statesmanlike in his interventions. He emerged from the conference with enhanced status and as a compromise figure who won the respect of both sides.

In other words, the compromise candidate in waiting.

There may be some procedural difficulties in the way of appointing him deputy president. Our interim democratic Constitution provided for two deputy presidents to accommodate Mbeki and F. W. de Klerk during the brief Government of National Unity, but our final Constitution does not. It specifies that the president must appoint “a deputy” from among the members of the National Assembly.

The singular article presumably means only one deputy president, although some constitutional lawyers think this is open to question. Also, Motlanthe is not an MP. But the president has the authority to appoint a limited number of cabinet ministers from outside Parliament, and if the second slot cannot be reopened he could replace the present deputy, Phumzile Mlambo-Ngcuka, with Motlanthe.

Displacing Mlambo-Ngcuka would be a pity. She has done a good job in difficult circumstances. But political conditions have changed and the government must adapt to the new realities. By no stretch of the imagination can Mlambo-Ngcuka now be considered a possible candidate for the national presidency (she was never a front-runner anyway), so her position as deputy president becomes somewhat anomalous. She could be compensated by being redeployed, perhaps as a minister of state in the presidency, where she could continue to perform most of her present functions.

My main reason for advocating Motlanthe’s appointment is because I think South Africa is going to need his steadying influence. I say this because I fear the course that events may take over the next eight months as the Zuma camp, which contains some reckless elements, does everything it can to prevent their man being brought to court. Some of the most important institutions of our new democracy could suffer terminal damage in the process.

It is absolutely vital that Zuma should have his day in court to clear his name if he can. We know now what the charges against him are. They are extensive, detailed and serious. It is unthinkable that he should become the ANC candidate and president of the country after that, without those charges being tested in court and with the huge stigma of the allegations still hanging over him.

Yet that is what those in the Zuma camp want. And it looks as though they are prepared to go to extreme lengths to achieve their objective.

They want to disband the Scorpions, Zuma’s investigators, before his trial begins. They have launched reckless attacks on the judiciary and the whole judicial process, with explicit accusations that they are open to political manipulation. Not a shred of evidence is advanced, yet the constant repetition of these smears can only undermine public confidence in these institutions which are the very pillars of our democracy.

We have even reached the point where a senior member of Cosatu has predicted that blood will be spilled on the courtroom floor if Zuma is brought to trial — an utterance that surely verges on incitement to violence.

And when two of our most eminent and respected legal figures, former Chief Justice Arthur Chaskalson and human rights advocate George Bizos, issued a measured statement warning against such irresponsibility, they were dismissed by someone describing himself as a member of Zuma’s legal team as two “old fogeys” no longer in the loop and, therefore, with no right to express their opinions.

So much for our brave new non-racial, non-sexist and presumably non-ageist society.

The Zuma camp’s attacks on the media are rising too. Which I guess is hardly surprising since it is the media that has exposed just about every instance of corruption and fraud that has turned this country into a quagmire of venality nearly as bad as Nigeria, while the state’s own watchdog institutions have sat back with folded arms.

Yes, there are many defects in the media. After all it too is undergoing transformation. But after more than half a century as a journalist in this country, through some of its darkest years, I have never been more proud of my journalistic colleagues than I am right now — especially the new generation of courageous and determined young black editors. If ever the Zuma regime tries to silence any of them, they will find a deadly enemy in this old fogey.

But my greatest fear of all stems from the new ANC’s appointment of a committee of eight to investigate the arms deal. There are some fine people on that committee, but I am deeply suspicious of the motive for appointing it. Ostensibly it is to inform new members of the National Executive Committee about what really happened. And the committee’s report is supposed to be confidential. It won’t be made public.

It will leak, of course, and so it should. The facts of this massive scandal involving billions of rands of public money are not a private, in-house matter for the ANC alone.

But what I suspect is that the real purpose of this in-house exercise is to expose involvement on the part of Mbeki and some of his senior lieutenants in the arms deal and its cover-up, then to use that information as political leverage to try to force the president to intervene and have the charges against Zuma dropped.

Such political intervention in the judicial process would be improper, unethical, illegal and a violation of the rule of law and of the Constitution itself. It would be the death knell of our democracy.

Yet I suspect that is what the Zuma camp is aiming at.

• Allister Sparks, a former editor of the Rand Daily Mail, is a veteran South African journalist and political commentator.