THE Elvira Venter Dance School will be hosting a production entitled Stages at the Uvongo Town Hall from November 11 to 13.... 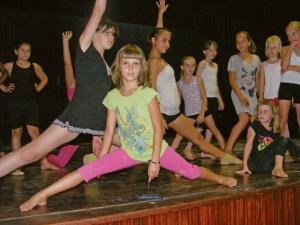 THE Elvira Venter Dance School will be hosting a production entitled Stages at the Uvongo Town Hall from November 11 to 13.

Rehearsals are being held for the production, which has a cast of around 60.

The cast is made up of about 50 female members of the dance school and a few males from the Port Shepstone Rotary Club, which, said Venter, adds an element of humour to the production.

Stages tells the life story of a young dancer as she goes from a class situation, exams and auditions to performing on stage.

Four actresses are used to play the role of Roxy, the main character, as she ages along her road to stardom.

Venter has put on similar shows every second year for the past 28 years, making this her 14th school production.

She is certain that this year’s production will be a success.

“I am very positive and we are well organised,” she said.

“We can promise those who attend the show that they will enjoy a variety of dance from hip-hop, contemporary, modern, Broadway and even a ballet number.”

Funds raised from the show will be donated to the Port Shepstone Rotary Club, which will distribute them to charitable causes.

Tickets are R40 and can be bought from Aquarius Pharmacy in Port Shepstone, Rams­gate Stationers in the South Coast Mall or at the door.

Shows on November 11 and 12 will begin at 7 pm, with an afternoon show on the November 13 beginning at 2 pm.