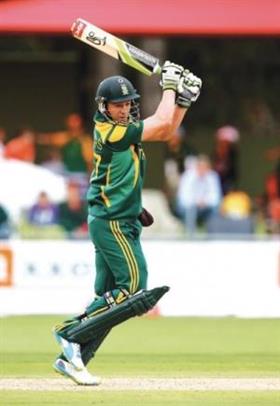 The Proteas captain said poor fielding was one of the main reasons why his team lost the second one-day match by one run at St George’s Park on Wednesday.

With that run, Pakistan clinched the three-match series.

De Villiers said the team could not really criticise the bowling, for in retrospect, he was more disappointed with the fielding.

The Proteas set high standards for themselves when they are on the field and have established a reputation as one of the best fielding teams in the world over the years.

At St George’s Park, the Proteas players, however, did not seem as totally committed to catching or blocking balls as did Pakistan’s players.

One can understand that De Villiers, one of the fastest fielders in international cricket, is disappointed.

His statement that the bowlers are not really to blame for not chasing down the target must, however, be taken with a pinch of salt.

With the exception of Dale Steyn, most of the bowlers performed below their best.

“They are all good players who have played well time after time,” De Villiers said.

From the sidelines, it also appeared the Proteas bowlers were struggling to find the right line and length.

Steyn was the exception and delivered his best analysis yet in international one-day cricket (6/39).

“I think I brought him into the attack a little late,” De Villiers said.

“He did get six wickets, but maybe I should have given him the ball two overs earlier.”

The only batsmen that De Villiers blamed for the narrow loss was himself. He said Hashim Amla tried to calm him down, but he lost sight of the game plan.

“I had the match in my grasp with Hash,” he said.

“I think it was with something like 40 runs with 40 balls left and I have won many matches from that position. I was on a bit of a roll out there and maybe I should have taken a breather and relooked at the situation,” he added.