Digging up the dirt on digs

UNDIES on the floor, piles of unwashed dishes in the sink and a room that is so filthy it should be declared a science experiment … that is usually what parents imagine students pads to look like after a week of hard living... 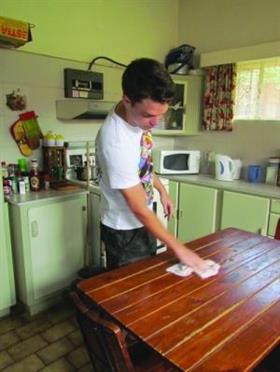 UNDIES on the floor, piles of unwashed dishes in the sink and a room that is so filthy it should be declared a science experiment … that is usually what parents imagine students pads to look like after a week of hard living.

When university students head back to their respective universities many of them have decided it’s time to break out of “res” and set up home in a “digs”. A proverbial place to chill with friends without the parental nag-factor. But this new found independence may come with its own set of problems.

Finding suitable digs mates and working out a set of comfortable rules that are agreeable to everyone may take some negotiation.

Weekend Witness chatted to some people about their digs experiences and discovered what makes digs pigs and dream digs mates.

One woman, who did not want to be named, said: “In my sister’s digs there was a guy who was permanently drunk.

“He had a bar fridge in his room and he only ever used his portion of the grocery money on buying booze.

“The domestic worker that worked on cleaning the whole commune eventually refused to clean his room because it was so disgusting.

“He used to brag that he wore the same underpants for a month.”

She said that the offending digs mate was kicked out of the digs after a year, and his parents admitted him to rehab. Estate agents said that while many homes around the university become digs, homeowners do not originally intend their homes to turn into student pads.

But this possible “unattractive” option is due to the housing market and the low rentals. Many estate agents Weekend Witness approached for comment said they did not like renting out homes for digs because of the “headache factor.”

Shaun du Bois from Just Letting said: “The problem with digs is that the person who signs the lease [usually a parent] is not the person who lives in the house and the parent lives in another city. Therefore there is no direct chain of responsibility.

“In some cases the student who lives in the house can be responsible and it can work, but we have had complaints from neighbours about noise. Usually it depends on the maturity of the students and the number of students. There needs to be some kind of control.”

Students who plan to move out of res into a digs need to plan ahead — moving into the first digs that has an opening could be a horrifying experience. While you envisage a whole new level of freedom, you may find it a social nightmare.

You are used to mixing with other people — but now you are confined to their company. They live with you.

So if they drive you crazy, you may find it hard to escape from them. Living in a digs can cause violent eruptions and character clashes that usually cause people to choose sides.

Like any democracy the minority party may be made to feel unwelcome. Keeping communal spaces clean and relatively hygienic is the most common cause of arguments, said Rene Goosen, a Pietermaritzburg digs mate.

“Surprisingly it was the girls I lived with who were the worst,” she said.

“The guys just stuck to the duty list, but the girls in my last digs were plain ‘nasty’.”

She recalls one girl who had morals that were “very flexible”.

She said: “She never changed her sheets and had a number of men who shared her bed. Her dog also slept in the bed and he would poop in her room as she would lock him in her room when she went to lectures.

“Of course she was too lazy to clean up after the poor thing. It was disgusting — but her male visitors never seemed to mind.”

Ex-student Pam Kentrall said: “Digs is one of the best experiences I’ve had. I was lucky with the people I lived with. So many people have issues with their digs mates; my advice is to ignore the little issues. Don’t sweat the small stuff. You can’t expect to make the digs run like your family home does. Try and have fun.”

Digs lodger Rhys McColl said its a sensible alternative to res living and you can make friends for life.

Andrew Craib, a Maritzburger who stays in a digs at the University of Cape Town, said that wild digs parties are often rumours.

“Those of us who want to pass, need to crack the books a fair bit of the time,” he said.

“Usually the digs will have one or two parties a semester, but the wild ones are those close to the nightclubs or where the neighbours don’t mind noise.”

Kosi Khumalo said her one digs mate was completely psychotic.

“I was scared she was going to go crazy on me, she used to break everything I owned and eventually the landlord gave me a panic button … even they were scared of her.

“At my old digs the one girl was a druggie and she used to hide drugs in her room and when she lost her keys she broke the door down.

“At that same digs we used to forget to take out the rubbish, it got so bad there were maggots crawling out of the room where we threw all the bags.”