PUBLIC sector doctors are demanding a salary increase of at least 50% or they will go on strike. ... 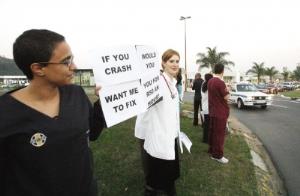 PUBLIC sector doctors are demanding a salary increase of at least 50% or they will go on strike.

This emerged in a statement released by doctors that was also posted on the Facebook page, SA doctors unite for OSD.

In the statement they say that the Health Department had proposed a salary adjustment of between 0,28% and five percent, depending on rank.

Some of the doctors’demands in relation to the 50% increase are that the increase should include senior medical staff, the OSD (occupation-specific dispensation) must be back-paid from July 2008 and that implementation needs to take place with immediate effect.

Doctors have threatened to go on strike if their demands are not met by today.

A doctor who asked not to be named said: “A lot of our colleagues are going into the private sector because they feel that the government is not doing enough for them. People are not aware that some doctors earn less than bus drivers,” he added. He also highlighted the amount of hours they work a day.

“I work from six or seven in the morning, and only get to leave 12 hours later,” he said. “I am one of the lucky ones.”

He said that interns sometimes work from the morning till late after midnight, and are still expected to be back at work in the morning. “We are pushed to the maximum,” he said.

He added that the equipment they work with is outdated and sometimes fails. “I was performing a skin graft on a child when the machine stopped working. This is our one and only chance to become equitable, and if we miss this chance, we will be marginalised as doctors for a long time,” he said.

“It is questionable if the South African Medical Association [Sama] really wants this matter resolved or not,” he said.

Sama says it rejects Mahlati’s statement. “Sama would like to emphasise that our figures have been based on careful research by an independent organisation … ”

The Health Professions Council of South Africa (HPCSA) said it does not condone the doctors’ strike, but it does acknowledge the need for equal pay and better working conditions.

HPCSA statistics show that in the past year, 3 550 certificates of good standing were issued for medical practitioners. Most of the certificates are requested by doctors applying for overseas positions. Some 22 032 certificates have been issued since April 2003.

THE South African Democratic Nurses’ Union (Sadnu) has also threatened to go on a nation-wide strike if its members’ OSD demands are not met. “The government has angered nurses in the country in the extreme,” said Sadnu national organiser Mohau Bodibe. “We have followed the legal procedures and went to court to get an interdict to force the department of Health to stop unlawful deductions from nurses’ salaries.”

He said morale is low as one nurse could end up attending to 200 people over eight hours. “Nurses are leaving. Every month there are about 100 nurses leaving the public sector.”