“NOW it’s tickets for me!” This was the first thought that flashed through the mind of Dr Markus Hofmeyr, head of veterinary services at Kruger National Park, when he was unexpectedly charged by a darted hippopotamus.... 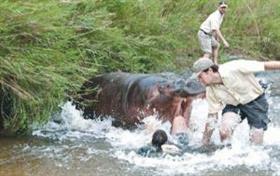 “NOW it’s tickets for me!” This was the first thought that flashed through the mind of Dr Markus Hofmeyr, head of veterinary services at Kruger National Park, when he was unexpectedly charged by a darted hippopotamus.

Hofmeyr said they were conducting research on a chemical substance for drugging hippos.

“This hippo was the 20th one drugged with that particular substance and we hadn’t had any problems before that.”

After the tranquilising dart hit the hippo, the animal entered the shallow water. With its rear end pushed into the bushes up against the bank, the animal stood passively in the water. They were busy working on the hippo when its head suddenly dropped below the water surface.

“We suspect it got water in its nose, which stimulated it back to consciousness. The animal was very dazed and confused when it straightened up again. It snapped in our direction and then came for us.”

The hippo knocked Hofmeyr over, but Dr Nico de Bruyn of the University of Pretoria’s Mammal Research Institute grabbed him by the arm and snatched him out of the animal’s way.

“The hippo passed between us and made for the deeper water.” The animal then swung around and started moving towards them again.

Hofmeyr and De Bruyn scrambled to get out of the river. A game ranger standing guard on the bank then shot and killed the animal.

“It is regrettable that the hippo had to die, but for our safety’s sake he had to be shot.”

Hofmeyr said the drug that is usually used for elephants and rhinos is too powerful to use on hippos.

“The biggest problem with darted hippos is that they usually flee into the water. Many then drown. That is why we started doing research to develop a more suitable substance specifically for hippos.

“The new drug is very effective and is definitely a breakthrough. This was the first time we experienced a problem like this.”

Hofmeyr said the dart seems not to have penetrated the thick hide of the hippo deeply enough. “A lesson we definitely learned from the incident is to muzzle these animals in future.”