“HOW do I make my child feel safe?” That was the question facing Warren McAllister after his family had been subjected to a home invasion at their New Germany house three years ago... 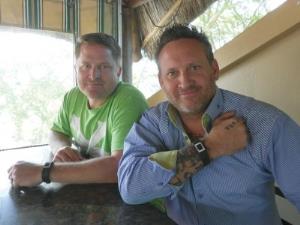 “HOW do I make my child feel safe?” That was the question facing Warren McAllister after his family had been subjected to a home invasion at their New Germany house three years ago.

This worrisome thought has now led to the design of a handy alarm bracelet, always within easy reach.

“I didn’t realise how much it had affected our son,” says McAllister, an entrepreneur with an electronics background.

“He didn’t say anything at the time. But three years on it became obvious. He didn’t want us to go outside the house. He wanted us to come inside, to put on the floodlights and the beams, and to set the alarm.”

Then, earlier this year, McAllister met well-known crime fighter Brad Nathanson who, contrary to previous reports, is still very much in business as a private investigator.

“Our interests dovetailed and we put our heads and our different areas of expertise together to come up with a solution.”

The solution turned out to be the Res-Q-Me security bracelet, in effect a mobile panic button but one with a difference — you wear it on your wrist. Thin and inconspicuous, it could be something a runner wears to measure pulse rate or a bracelet advertising a good cause like saving the rhinos.

“Normally panic buttons are on your key ring or on a wall somewhere in places where you’ve forgotten they are,” says Nathanson. “This you can have on you 24/7.”

The Res-Q-Me is linked to the house alarm system and can be used in a radius of up to 80 metres.

“It’s the smallest panic button ever made,” claims Nathanson, “and the only rechargeable panic button via a USB. We recommend charging it once a month but it will run for three months.”

The recessed button has to be pressed twice, which means less chance of it being set off accidentally or, for example, by a child rolling over in sleep. “And the button is slightly recessed, which makes it easy to find at night or for blind people to use.”

McAllister says the modus operandi of house robbers has changed. “It’s not like the old days when they wanted you to leave the house before they broke in. Now they want you there.”

Nathanson says this means robbers are then in control of the situation. “And they can stay as long as they need to. I dealt with one home invasion that lasted five hours.

“But with this bracelet a home invader won’t know where the panic button is when they come in, giving you the time to press it.”

The design for the Res-Q-Me was finalised in March and the first batch have just arrived from the manufacturers.

“I had told my son nothing about what we were doing,” says McAllister.

“When I put the first one on his arm and said, ‘My boy, whenever you feel unsafe or in danger all you have to do is press this twice’ his face just lit up. I get goose bumps thinking about it. Now he’s a changed kid, 100%.”