Dusi could be cancelled

FOLLOWING widespread media attention on the health risks associated with paddling the Hansa Powerade Dusi Canoe Marathon, race organisers have shunned the efforts of Umgeni Water and the municipality to keep tabs on the water quality in the river. 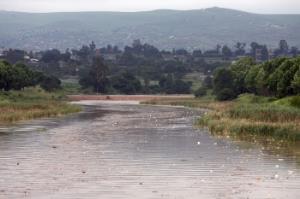 FOLLOWING widespread media attention on the health risks associated with paddling the Hansa Powerade Dusi Canoe Marathon, race organisers have shunned the efforts of Umgeni Water and the municipality to keep tabs on the water quality in the river.

They have announced that Dave Still, chairman of the Dusi Umgeni Conservancy Trust (Duct), will be the only consultant on water quality.

They have vowed that if the water quality is poor for future races, they will cancel the race, rather than risk the health of the paddlers. The organisers are adamant that the race continues to be the leading canoe marathon in the world.

The future of hosting the race has been threatened after more than 50% of the paddlers who participated reportedly suffered from illness associated with contaminated water, or Duzi Guts.

In a statement released by the organising committee yesterday, chairman Cameron MacKenzie said the biggest challenge facing the future of the race is the poor water quality.

MacKenzie said that the level of illness among paddlers is unacceptable.

“The paddlers are our top priority and we will leave no stone unturned to rectify the state of the water,” he said.

He confirmed that once received, E.coli counts will be published on the race website www.dusi.co.za and paddlers can make up their minds as to whether they should paddle or not.

MacKenzie added that the committee does not support the general categories as released by the panel of experts on the Dusi task team, used during the race to indicate risk.

“The single biggest problem with water quality is the state of the sewage system in the Pietermaritzburg area. We will make representation to the Msundusi Municipality, Water Affairs Department, Umgeni Water and central government to help us to solve this urgent problem as soon as possible,” he said.

MacKenzie is adamant that the Dusi belongs to every South African and that he and his team have the responsibility to ensure that they protect the event and expand it. In the unlikely event of the organisers not being able to find a suitable alternative start, he said they will not hesitate to cancel it entirely.

“While this action might seem drastic, the health and safety of our paddlers is not negotiable,’ he said.