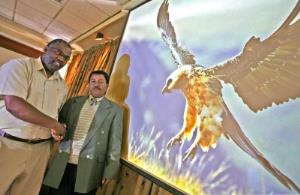 A delegation consisting of six senior conservation officials from Ethiopia met with the Ezemvelo KwaZulu-Natal Wildlife (EKZNW) executive staff to sign the agreement at the EKZNW headquarters.

EKZNW CEO Dr Bandile Mkhize said that the agreement will allow the sharing of knowledge and expertise between the two parks.

“Today we are cementing a partnership, not only with local stakeholders, but with those from the African continent,” he said.

Kahsay Asgedo, the acting director-general of the Ethiopian Wildlife Conservation Authority, said it was a pleasure to go into partnership with the Ukahlamba Drakensberg World Heritage Site.

“These two countries have strong socio-economic and political ties, and this agreement will strengthen these ties,” Asgedo said.