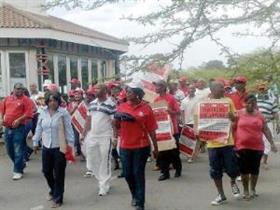 The employees had opted to strike at their place of work over a wage dispute with the national retailer.

A group of Pick n Pay employees from the Margate branch of the store also took part in the strike.

Lieutenant Colonel Zandra Wiid, police communications officer in Port Shepstone, said of the strikers in Shelly Beach.“They weren’t supposed to be at work today, but they went into the centre.

“They were blowing their vuvuzelas and causing a disturbance.”

Wiid said the strikers were each fined R500.

Owen Phewa, one of the employees striking in Shelly Beach and who avoided arrest, said he was extremely angry because of what he had seen happen to his colleagues.

“These police don’t know the law,” he said.

“We are going to challenge these fines in court.”

Phewa added that he and the other Shelly Beach strikers were not violating any laws.

“This is an official strike and we were not given any paperwork telling us what we were not allowed to do,” he said.

“We were marching peacefully.”

Phewa promised that the strike will continue.

“We will keep striking until our [wage] demands are met,” he said.

“They can arrest us, they can shoot us — we will strike until we die.”

Senior management of Pick n Pay were unavailable for comment at the time of going to press.