Now that Mitchell Johnson is firing on all cylinders again, it must be acknowledged that the attack at Michael Clarke’s disposal is much better than the one that he had in England, writes RAY WHITE.. 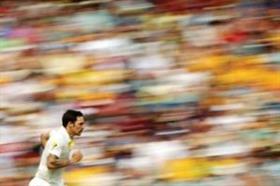 Now that Mitchell Johnson is firing on all cylinders again, it must be acknowledged that the attack at Michael Clarke’s disposal is much better than the one that he had in England,

AUSTRALIA’s big win should not have been a surprise.

I did not see it coming, but others, notably Shane Warne, genuinely believed that Australia would beat England in the first Test match of the latest and seemingly endless Ashes series. Those whose foresight was greater than mine reasoned that the series in England was much closer than the 3-0 outcome and on reflection I have to agree that they were right.

The first Test was decided by the narrowest of margins. The third Test would surely have been won by the Aussies had it not rained. The fourth was all but won by the Aussies when their batting collapsed in the face of a late inspired spell of bowling by Stuart Broad and in the fifth the Aussies were on top until Michael Clarke made a risky declaration on the fifth afternoon and then nearly lost the gamble.

It was only in the second game at Lord’s, which the home team won with ease, that England appeared to be much the better team. Some commentators were able to look past the Lord’s match to discern that England had not coped well with an Australian attack that was close to its strongest only in the first Test when James Pattinson was still fit, but even then Nathan Lyons did not play in that match.

The destroyer of England’s batting at the Gabba, Mitchell Johnson, did not appear in England until the one-day matches when he gave the now departed Jonathan Trott such a torrid time. Nathan Lyons, who took crucial wickets in Brisbane, did not play in the first two Tests. Only Peter Siddle and Ryan Harris of the present attack played in all the England Test matches.

Now that Johnson is firing with renewed vigour, it must be acknowledged that the attack at Clarke’s disposal is much better than the one that he had in England where he was unable to put his opponents under the constant pressure that so often brings wickets. This is one reason why Ian Bell, batting in the middle of the order, was able to play with the freedom that brought him four centuries at crucial moments.

A colder analysis of Australia’s chances this summer would have come to the conclusion that there are now more players of Test class in their team than there have been for several seasons. Of the present lot I would suggest that their current non-starters are limited to Rogers, Smith, Bailey and possibly the wobbly Watson.

The other seven all had good games at the Gabba and of these, their four best players, Clarke, Warner, Haddin and Johnson, delivered match-winning or -saving performances. That is probably as good as it will get for Australia, which is why I cannot see England failing to win at least one Test and probably the two that will almost certainly ensure their retention of the Ashes.

It is unlikely in this series that Australia’s top four players will again perform in such harmonious concert. For Australia to regain the Ashes it will be important for their bit players to perform well above their apparent class. Watson might do it once as he did in England, but his batting at the Gabba was almost as poor as that of Trott who has probably left the scene for good.

Rogers and Bailey looked too bad to be true in Brisbane and I will be surprised if both are still in the squad who come to South Africa later this summer. It speaks volumes about Australia’s woeful depth of batting if these are two of their best batsmen. I have played in league teams that would have been reluctant to play either of them. Smith is not much better, but he had a good time of it in England. He deserves to be in the team for now, but one cannot help feeling that England’s bowlers relish the prospect of bowling to him.

This brings one to England, now reeling from a dreadful hammering. Alistair Cook needs his best players to perform now that he is without Trott, who was immense on the last tour Down Under when he occupied so much time at the crease and emptied the energy from the legs of Australia’s bowlers.

Pietersen can be relied upon to produce at least one big innings, but the keys to any English successes might well be Bell and Root, one of whom will be asked to bat at number three. If these two go on to have good series, I think England will be difficult to beat.

Next week’s match in Adelaide has come at a fortuitous moment for England. Of all the venues this is the one most likely to suit England in their current state of disarray. The drop-in pitch there has offered little to spin bowlers and nothing to the quicks. If they had wanted a pitch that would blunt the pace of Johnson they could not have done better than this one, which a year ago saw South Africa stave off defeat on the deadest of strips.

This is a chance for the English batsmen to find some form before hostilities resume in Perth. I still think that there are more quality players in the England team than there are in that of Australia. The question is whether or not the Aussies have begun to get on top of a number of the Poms. In this regard England need to see good performances from Cook, Anderson and Swann during the remaining matches if their team is to retain the Ashes. If these three fail to deliver then it is hard to see England coming back from the loss at the Gabba,

From a South African perspective our own summer will be more intriguing if the Aussies come here as holders of the Ashes. After the disappointing truncation of the Indian tour this would provide fresh challenges for our players who look bored to tears with the pesky Pakistanis who have not read their scripts and refuse to accept defeat.