Every map tells its own story

“MAPS are a way of looking at history,” says Andrew Duminy. “Paging through this book you are paging through South Africa’s history.”... 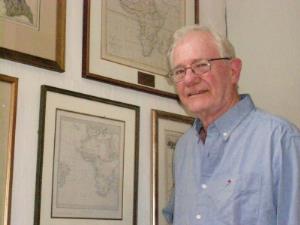 “MAPS are a way of looking at history,” says Andrew Duminy. “Paging through this book you are paging through South Africa’s history.”

Those pages belong to Mapping South Africa — A Historical Survey of South African­ Maps and Charts authored by Duminy­, professor emeritus of the University of KwaZulu-Natal, biographer of Sir Percy Fitzpatrick and author of several studies and books on the Cape Frontier and KwaZulu-Natal.

“Maps belong to their own time,” says Duminy. “You can’t get away from the fact the maps in this book portray the conquest and occupation of South Africa. For example, Jeppe’s 1899 map shows how, in only 25 years, the Transvaal had been staked out with white-owned farms. It’s quite dramatic­.”

The initial inspiration for Mapping South Africa lay in Duminy’s own curiosity.

“I wondered how in the 18th century ships were navigated,” says Duminy. “How coastlines were charted. How they navigated the coast of southern Africa.

“Cartographers are interested in who drew the map, who the lithographer was, but I was interested in the story behind the map, where the information came from. Someone must have travelled to these places, stood on the spot, and taken information back so someone could draw the map.”

Mapping South Africa is a fitting tribute to their endeavours. Beautifully designed and illustrated with reproductions of nearly 100 maps, Duminy’s book details the history of mapmaking in southern Africa from the 15th-century Portuguese voyages of exploration to modern times, featuring the successive Dutch and British attempts to chart the Cape Colony then, as white immigration and settlement continued, the mapping of the Eastern Cape and Natal, as well as the Boer republics of the interior.

Of particular interest to this part of the world, and a real coup on Duminy’s part, is the reproduction of the earliest published map of Natal by Nathaniel Isaacs, lithographed in London in 1828. The map was used to promote Natal as an area for commercial exploitation and was published eight years before Isaac’s Travels and Adventures in Eastern Africa.

Duminy discovered this map in the South African National Library in Cape Town. Another find was Sir James Carmichael Smyth’s 1805 map of the Cape which contains an impressive amount of accuracy and detail. Duminy’s book also contains a nod to a relative, Francois Renier Duminy, the subject of an earlier book, who, between 1781 and 1793, “undertook an extensive survey of the Cape coastline for the Dutch East India­ Company”.

“The first mapmaking impulse was maritime­,” says Duminy and the first South African maps feature the Cape coastline. “It was essential to have clear and precise outlines to be able to navigate the coastline.”

After shipping came the military. “The Anglo-Zulu War caught the British army on the hop,” says Duminy. “There were no maps to be had and they had to rely on guides. If there had been proper maps maybe Isandlwana wouldn’t have happened. But there were no accurate topographical maps. It was the same story with the Anglo-Boer War.”

The lack of maps during the Anglo-Boer War gave impetus to the later trigonometrical survey of South Africa, but such surveys remained provincial responsibilities until the creation of the Colonial Survey Committee post-Union in 1910, and it wasn’t until 1920 that the survey work of all four provinces was combined under the Trigonometrical Survey Office and only in 1929 that “the systematic triangulation and mapping of the entire country commenced”.

Prior to the advent of space satellites and digital photography, mapping was dependent upon surveying by means of triangulation, but in the 20th century two developments took place which greatly increased accuracy: the use of photography and the invention of devices to measure distance by means of the reflection of microwaves or light waves. “Two South Africans stand out as pioneers in these fields,” says Duminy. “Henry George Fourcade and Trevor Wadley.”

Fourcade (1865-1948) used stereoscopic photographic techniques and invented photogrammetry, “a process whereby photography­ is used for survey in place of theodolites”. Although his achievements in other fields, notably botany and forestry, received recognition Duminy says Fourcade’s impact on surveying remains largely unrecognised in South Africa. “Fourcade had the ability to think in three dimensions,” says Duminy. “He is one of the lost geniuses of South African science.”

Today their work has been superseded by the Global Positioning System developed by the United States. “In the context of these changes, the struggle that once engaged the world’s greatest minds and demanded their skill, courage, endurance and ingenuity seems to have lost its relevance,” says Duminy. “It is easy to forget that their story — of which the mapping of South Africa forms a significant chapter — was one of the most important in the evolution­ of the modern world.”

• Mapping South Africa — A Historical Survey of South African Maps and Charts by Andrew Duminy is published by Jacana.