A family of five in the informal settlement of France lost everything in a fire allegedly caused by the ex-boyfriend of one of the daughters yesterday morning. 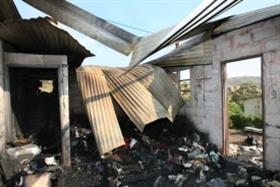 A family of five in the informal settlement of France lost everything in a fire allegedly caused by the ex-boyfriend of one of the daughters yesterday morning.

The man, believed to be from Sinathingi, allegedly drenched the Gumede house with petrol and set it alight at about 5 am, while trying to block the entrance so his ex-girlfriend, Zandile, her 18-year-old sister Thandeka and her three-year-old child, who were in the house, could not get out.

Zandile’s mother and owner of the house, Jabu Gumede, said she received a call while at work at about 7 am about the fire.

She rushed home to find all that she had worked for had been reduced to a black, empty shell.

She said Thandeka was able to climbed out of a window with the child. Zandile had to be rushed to Edendale Hospital, together with the suspect, in a critical condition.

“I don’t know what to say, I feel lost. This boy has been trouble from the start. My daughter had got a peace order after breaking up with him a month ago. Now he decides to take away everything I have worked so hard to get,” said the visibly distraught mother.

Gumede works as a domestic worker and is the only breadwinner for her daughters and grandchildren. She said she and her two daughters and two of their children will be forced to squat at her sister’s home until she can figure something out.

“I really don’t know where to go. I’ll cry, but who will answer. What really upsets me is that this is my house. This boy had no right to come here and do this to my house, because it doesn’t belong to my daughter, but to me.”