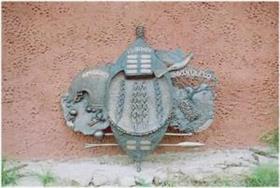 They were arrested by police at the roadside late at night last week, carrying a sack which allegedly contained pieces of the memorial.

The police said while doing their rounds in the area, they encountered the three men carrying bags.

When the men were searched, the policemen found pieces of a bronze plaque from the Bhambatha Uprising memorial statue as well as a hammer and two shifting spanners. Police suspect the valuable copper memorial was destined to be sold as scrap metal.

The three suspects were charged with possession of stolen property and malicious damage to property. They were remanded in custody.

Barry Marshall of Amafa said it is alleged that the three men had sawed pieces off the bronze memorial which stands at the corner of Fielden and Lamport Streets.

The memorial was erected in 2006 by the provincial heritage conservation agency for KwaZulu Natal, Amafa/Heritage KwaZulu Natali. It is dedicated to 12 insurgents of the 1906 Bambatha uprising against poll tax, who were executed by firing squad in the area in 1906. Marshall said what the thieves did was tantamount to desecrating a grave. “This memorial was erected to honour all those people who gave up their lives and died fighting for this country, and for their memory to be desecrated in such a manner is sad.”

He was especially angry about the damage done, as the thieves would not easily have sold their loot. “This was a special piece and the metal dealers would have seen that this was a valuable item and not have bought it.”

Marshall said this was the second time that memorials had been damaged for copper.

“A few years ago, some thieves also vandalised a memorial of the Zulu Fallen in the Isandlwana battle site; unfortunately, we did not catch the vandals.”