EVEN the massive weight of expectation, and the dangers that come with being overwhelming favourites, should not prevent the Sharks beating the Lions at King’s Park this afternoon and advancing to a home Currie Cup final on October 25. The bookies are tipping both the Sharks and the Blue Bulls, who take on Free State at Loftus in the other play-off, to win their semi-finals by 13 points today. 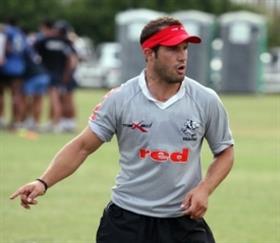 EVEN the massive weight of expectation, and the dangers that come with being overwhelming favourites, should not prevent the Sharks beating the Lions at King’s Park this afternoon and advancing to a home Currie Cup final on October 25.

The bookies are tipping both the Sharks and the Blue Bulls, who take on Free State at Loftus in the other play-off, to win their semi-finals by 13 points today.

The Sharks’ plan has fallen neatly into place in the second half of the Currie Cup season and they have almost every advantage this afternoon.

Pulling the strings is the sensible, astute John Plumtree, a coach who keeps his feet on the ground and his lip buttoned. Playing to a game plan that suits them perfectly, the Sharks have found their form and momentum at the right time. They have twice (16-11 and 34-20) beaten the Lions in round robin play this season, they have the luxury of playing at home and their ranks are liberally sprinkled with experienced internationals.

There are 12 in their starting line-up and four more on the bench; the Lions have one Springbok in centre Jaque Fourie.

The Sharks have the more decisive game-breakers in players like JP Pietersen, Adrian Jacobs, Frans Steyn, Ruan Pienaar and Ryan Kankowski, and their talented bench consistently makes an impact. On a hot Durban day — the temperature is expected to reach 28 degrees — and with an early start, the liveliness of their replacements should prove an additional bonus in the closing stages.

But these are facts and statistics and history. Sporting contests are often decided by courage, a spark of individual brilliance, missed opportunities or a referee’s decision.

The Lions are convinced they had the beating of the Sharks in their recent Currie Cup game before a series of dreadful errors ended their challenge. They believe they can break the Sharks’ rhythm by dominating at the tackle, where Cobus Grobbelaar is an expert at poaching possession or slowing up the ball. They are a spirited, balanced team and showed, in limiting Western Province’s inroads last week, that they have heart and tenacity.

Coach Loffie Eloff has changed tack this week, including Louis Strydom, and his prodigious left boot, at flyhalf, switching the unpredictable Earl Rose to fullback and suggesting that the Lions will play a more conservative, slower game to negate the Sharks’ attacking style.

But the Lions are also dangerous today because this is a one-off game, sudden death over 80 minutes, and the past season is forgotten. The Lions also have all the advantages of the underdog, underrated in some quarters, written off in others but certainly able to pressure the Sharks if Johann Muller’s team fail to keep their shape and structure as they did in the second half against Griquas last weekend.

Plumtree is not taking anything for granted and he (and no doubt Frederic Michalak who was there) cites the French 2007 World Cup win over the All Blacks as an example of how a unified effort can shock, rattle and bring down a more talented team of individuals.

“We have spoken about it all week, keeping our focus and not looking beyond this game. We have worked hard for this moment and it will be tough.”

Plumtree agreed that the breakdown was a critical area “but it is in all these big games”.

He said that he was surprised to see Louis Strydom named at flyhalf “because he hasn’t had a lot of game”.

“We will have to be accurate in our kicking game, because Rose is dangerous and he will look to counter-attack. But their selection won’t change the way we play.”

Plumtree is not given to extravagant predictions, but he did say it would be a “massive disappointment” if the Sharks did not win.

And Sharks supporters who have waited 12 years since the last Currie Cup title win would echo that — particularly as the team of 2008 have the look of champions.