A 27-YEAR-OLD mother is being held for questioning by police after her two toddlers burnt to death in their Durban flat yesterday afternoon ... 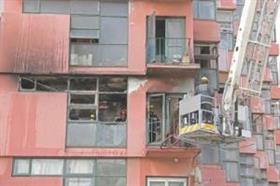 A 27-YEAR-OLD mother is being held for questioning by police after her two toddlers burnt to death in their Durban flat yesterday afternoon.

Police spokesperson Colonel Vincent Mdunge told Weekend Witness that the mother went to a nearby shop, leaving the two children — aged three and one and a half — locked in a room in West Point Lodge on Victoria Embankment.

“Both of them were locked in a room with a padlock on a steel gate. On her way back she realised that there was fire coming out of the flat,” he said.

The mother raised the alarm, upon which an SAPS search and rescue team rushed to the scene. “They had to break the doors and were forced to cut the padlock in order to rescue the two children. However, it was too late — they were both burnt beyond recognition.”

The fire, which had started on the second floor, spread to the first and third floors and caused extensive damage, he added.

ER24 spokesperson Derrick Banks, whose personnel declared the children dead, said the mother collapsed when she was given the tragic news.

“She wasn’t there when we arrived,” he said. “We later took her away to a safer location because the large crowd which had gathered outside the building appeared to be getting restless.”

Although the incident was reported to have taken place around midday, bystanders and neighbours continued to line the street outside the building hours later.

“I passed the building at lunch time, and heard the sound of windows shattering,” said Keshree Hamid, who works in nearby Field Street. “I looked up and saw fire. At that time nobody was panicking because we didn’t know there were children inside. I only heard about that on the radio later, so I returned.”

Others, including building security personnel, refused to talk to the media. “We don’t live here; we just came here because we heard two children had burnt to death. We don’t want to say anything,” said one woman, who told her companion not to agree to an interview.

“I don’t know anything, I’m just a visitor,” said another woman, who was identified as a neighbour by the crowd.

Mdunge said that a rumour that the fire had been caused by a stove which the mother had left on was unconfirmed as the incident was still being investigated by the fire department.

“The cause of the fire is officially unknown at this stage,” he said. “If it is established that there was any element of negligence on the part of the mother, she may be charged for contravening the Child Protection Act — a case docket for inquest has been opened.”

The mother is being held in police custody and is also receiving professional counselling, he said.

The names of the children will only be released once the next of kin are informed.