A Chubb security guard and police members have been hailed as heroes following the dramatic capture of four alleged members of the notorious “five-minute gang” in Chase Valley Heights late on Saturday afternoon. 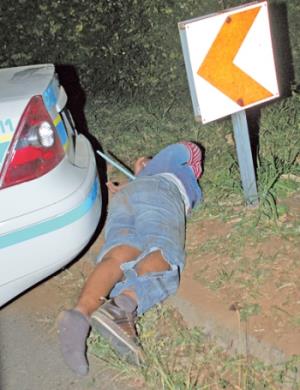 See all the photos at the end of the article.

A Chubb security guard and police members have been hailed as heroes following the dramatic capture of four alleged members of the notorious “five-minute gang” in Chase Valley Heights late on Saturday afternoon.

The drama began when reports were received of break-ins at Kelly Drive in Montrose and Valbridge Road in the Chase Valley area at around 4 pm. A dark-coloured BMW X5 was reportedly spotted at the scene.

Police spokesman Senior Superintendent Henry Budhram said the task team assigned to investigate the spate of housebreakings in the area spotted the BMW, and gave chase.

Chubb security guard Joshua Kunene (38) also sped to the scene. As he drove up Chase Valley Road, he saw a black BMW X5 heading towards him, which he realised was driven by the suspects.

As he tried to stop their vehicle, they rammed him off the road, sending the Chubb Toyota Yaris rolling down an embankment. On impact, the BMW’s driver’s side wheel was wrenched off and the car ground to a halt. The suspects fled, splitting up in the dense bush along the road.

“After numerous attempts to stop them escaping, the SAPS members fired at the fleeing suspects, seriously wounding one. Another was slightly injured when tackled by the police dog and the remaining two escaped injury,” said Budhram. The four are aged between 30 and 35.

“The seriously wounded suspect was removed to hospital and admitted under police guard. The other injured suspect was treated at the scene.”

Budhram said the suspects could well be part of a larger gang and that further arrests are possible.

Housebreaking implements, including a crowbar and a sledgehammer, were found in the car. It is believed that bottles of Jack Daniels bourbon whisky were also found in the car, along with jewellery stolen in one of the housebreakings.

The suburbs around the Town Hill police station were crawling with police on Saturday. Tension was high among them as they were determined to catch the gang that has been terrorising the neighbourhoods for the past month.

Police on the scene were elated that the suspects were nabbed and said their hard work paid off. One said he has not had a weekend off “for ages” in their attempts to catch the gang.

Chubb Security spokeswoman Alison Bull said Kunene is recovering in hospital from severe whiplash and badly torn ligaments in his leg, and was monitored for concussion.

She thanked passer-by Greg Steyn, who helped get Kunene out of the mangled car to safety.

She said Kunene will be up for a bravery award. “He’s a hero. We are so proud of him and thankful he is not hurt worse.”

She described Kunene as an “exceptional employee and good team player” who has worked at Chubb Security for just over a year.

Residents at the scene said one of the suspects was seen in the area previously on crutches asking for directions to a local doctor’s home, which was later broken into. A pair of crutches was reportedly also found in the BMW.

While the injured suspect was waiting to be taken to hospital by ambulance, another sat on the side of the road, moaning that he had lost one of his shoes.

Budhram said no weapons were recovered from the suspects. He said the injured suspect was reported to be in a serious but stable condition late yesterday.

The gang’s BMW X5 had false Cape Town number plates, covering the authentic ones underneath. It is believed that the suspects are from Cape Town.

• Sources have said that previous arrests are now not thought to be linked to the gang.