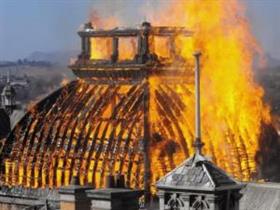 The roof, with several domes, fell in and the interior was destroyed by the fire, which started in the late morning. At one stage it threatened to spread to the adjourning FedSure building.

Msunduzi Municipality fire engines arrived on the scene within a short time, but fire-fighters seemed to be waging a losing battle as police and Msunduzi Traffic officers secured the scene. Church Street was sealed with emergency tape while scores of people stopped to watch the fire blaze out of control. What started as a small fire just before noon eventually consumed the building from one end to the other. It is believed the fire started on the second floor, but by 1.20 pm it had reached the far end of the building and engulfed both the first and the second floors.

Construction workers who were busy with renovations inside the building were quickly evacuated. GVK-Siya Zama Building Contractors has a two-year contract to restore the building. Company spokeswoman Amelia Keefer said workers were in the building when the fire started. “We don’t have full details of the cause of the fire. Everyone was evacuated from the building and to the best of our knowledge nobody was injured. The priority was to secure the building.”

The extent and financial cost of the damage is unknown at this stage. Keefer said GVK-Siya Zama will not be allowed in until insurers have completed their assessment. “Our insurers have been advised and they will arrive on site later this afternoon. All work on site has ceased pending an assessment of the conditions.”

Pietermaritzburg Tourism director Melanie Veness said the destruction of the building is catastrophic for tourism in PMB. “I think that it is fair to say that the Colonial Building is one of Pietermaritzburg’s most significant and impressive buildings. It is both architecturally and historically significant.

“Aside from the city hall, it is my favourite building and I was so encouraged when restoration work began on it. Not only from a personal perspective, but because tourists would once again have been able to visit it. It was heart-wrenching to stand and watch the flames engulf that beautiful dome and to ravage that exquisite facade.

“I hope that the fire department has managed to save enough of the building for restoration to be possible, because to lose that building would be really tragic.”

In a media statement, Msunduzi acting municipal manager Roy Bridgmohan said the cause of the fire is still to be determined. He said fire-fighting crews arrived at about 12.10 pm.

Bridgmohan said fire-fighters worked “on a strategy to first contain the spread of the fire within the building [to] protect adjacent buildings and then concentrate on extinguishing the fire”.

However, when Weekend Witness arrived on the scene at about 12.45 pm, the fire engines on the scene were failing to pump water on to the top of the building where the fire was burning.

“The specialised hydraulic platform fire unit was also dispatched to assist with attacking the fire from above the roof; however, due to insufficient water pressure, this attempt did not yield positive results,” Bridgmohan said.

He said almost 20% of the building was destroyed.