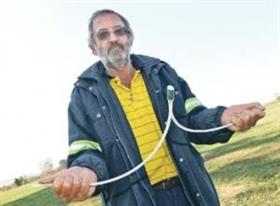 John Campbell has calluses on his hands. As a hardworking project manager for Working on Fire, this may seem logical, but Campbell’s bumps of hard skin are inflicted by a lively divining rod.

Made from two six-millimetre nylon rods, a piece of gas pipe and a glob of Pratley’s putty, these everyday items have been combined to form the tool which tells Campbell precisely where he can find water.

The Karkloof man has become a legend in his area as he pinpoints underground water sources, and predicts floods for farmers, not only locally, but around South Africa.

A rugged man, his appearance seems contradictory to the arcane art of water dowsing.

Campbell started divining for water over 20 years ago when he imported, for £5, a divining rod from the British Society of Dowsers.

“It’s a gift. Wherever I go I tell people to try it and they think, ‘but it won’t work for me’. I tell them to change their attitudes and then 80% of people can feel something when they hold the rods.” So what do they feel? “It pulls,” he says simply.

Campbell’s gift has been in demand, but he never advertises. For R500 he will tell you where underground water runs in your property.

“Before 1982, I would do it for a bottle of whisky,” he grins. “But then I started getting 15 calls a day and there was too much whisky to be drunk, so I thought I should stop that before I ran into problems.”

Campbell demonstrated his skill for The Witness on an open field. He walked until the rod dipped, indicating underground water. He then marked the spot by gouging a dent in the ground with his foot. Crossing the spot from another direction, they dipped again at the same place.

Campbell said that the dowsing stick’s predictive abilities do not stop at water.

“I have recently done an experiment to predict ‘orange’ and ‘red’ fire dates. My wife, Amanda, sat next to me with a calendar tracing over the dates with a pencil. She held my wrist as I held the rod and concentrated on fire indices. When the rods dipped, we marked the date where the pencil was.”

Campbell e-mailed the dates to The Witness, and we will verify if in fact these predictions are true in a later issue.

“In February 1987 I was in Umfolozi and told the guys at the local golf club that there would be big floods in September that year. When the floods happened, I got word that they reckoned I should be burnt at the stake as a witch,” he laughs.

Campbell said that divining rods can also identify where gold is. “If you put a gold ring over the rod, it will dip where there are gold deposits.”

He can also divine water just by holding his hand up.

“My hand heats up and my finger bends where the water is.”

He demonstrated for The Witness how even a bottle of water, held in the palm of his hand tilts on its axis when it crosses the path of a water course.

But where does the gift come from? Campbell said that his spirit guides provide the answers to the questions he asks when divining for water.

“I don’t talk out loud. People will think I’m mad.” He said the rods pick up the magnetic field of the water, and this works with electricity too.

“If my electricity goes off I can always tell if the fault is at my place or with Eskom if I take the divining rod for a walk under the Eskom lines which supply me.”

Campbell says that some medical practitioners warn of the dangers of living above underground water courses.

“A woman I know was diagnosed with cancer. She consulted an overseas physician who told her to check her home for underground water. I found there were 16 streams under her house and two directly under her bed. We moved her bed to a room where there were none below her.”

Campbell claims that bedwetting can also be treated by moving the child away from the underground water source.

Karkloof farmer Peter Goble attested to the accuracy of Campbell’s predictions, saying that he had warned farmers about the 1996 Christmas floods and the 1987 floods before they occurred.