Frans Steyn back for Sharks 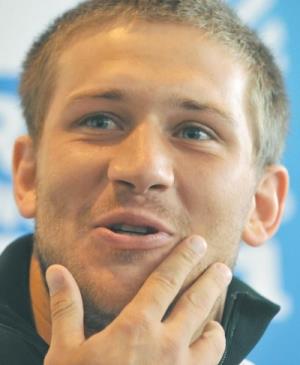 Steyn, who turned 25 this month, has been signed by the Sharks from July 1 and will be available for their two final Super Rugby league games in Durban — against the Bulls (July 6) and Cheetahs (July 13) — and any play-off games.

Steyn has spent the past two years playing for Racing Metro in the French Top 14 and his return to Durban was confirmed last night by Sharks CEO Brian van Zyl.

“We have signed him on a three-year contract and we are delighted to have him back,” said Van Zyl.

A prodigiously talented player, Steyn made his debut for the Sharks as a 19-year-old in 2006. After just 10 games he was included in the Springbok squad and a year later played a prominent role at inside centre in South Africa’s World Cup triumph in Paris.

A physical player with a massive boot, Steyn has played in every position in the backline except scrumhalf at both Super Rugby and international level.

In recent times he has played most of his rugby in midfield and he is expected to be at inside centre — with Jean de Villiers on his outside — for the three-Test series against England.

Bok coach Heyneke Meyer contacted Steyn soon after he was appointed Springbok coach and convinced the young player that his future lay in playing Test rugby in South Africa rather than club rugby in France. As a result, he turned down an offer to remain at Racing.

But as late as yesterday Meyer was still unclear about Steyn’s immediate future.

“We have to clear up a few ends with Frans,” Meyer said vaguely at a media briefing, “and we are waiting for confirmation from one of the franchises. At this stage we are not 100% sure whether Frans will be able to play in the first Test of the series.”

But by last night the Sharks were able to finally confirm the signing of Steyn.

Van Zyl said the plan was to have quality players challenging for all positions and, in Steyn, Tim Whitehead, Meyer Bosman, Paul Jordaan and even JP Pietersen, the Sharks suddenly have enormous midfield depth.

Sharks coach John Plumtree was delighted with the news.