French poetry from the islands 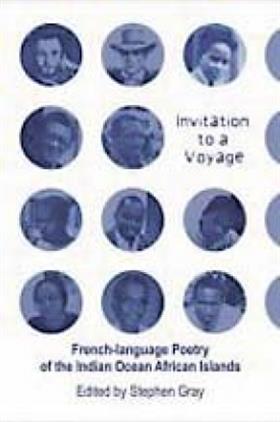 After considerable research and two visits focused particularly on collecting material, Stephen Gray has assembled an anthology of French-language poetry by writers indigenous to, or influenced by, the Indian Ocean African Islands. While a few of the poems have been rendered in Afrikaans, the material is essentially presented in English, much of it translated by Gray himself, with Carole Beckett, former lecturer in the French Department of the University of KwaZulu-Natal (Pietermaritzburg), as valued language consultant.

The anthology begins with contributions by writers whose associations with the islands — however tenuous or brief — have inspired responses. Notable among these is Charles Baudelaire (1821-1867), whose poem, Invitation to a Voyage,

lends its title to the current publication.

Representative material has been collected from the islands of Réunion, Mauritius, Madagascar, the Seychelles, the Comoros and Mayotte. Wide-ranging in both content and style, it reflects the individual concerns of writers in given contexts, past and present. The work is set out in discrete sections per island and pithy biographical notes helpfully accompany the work of each writer.

While the collection features established luminaries such as Leconte de Lisle (1818-1894), founder of the Parnassian movement in French poetry, the much published Robert-Edward Hart (1891-1954) and the Mauritian, Edouard J. Maunick (b.1931), now resident in Pretoria, the work of lesser known talents — for example, those committed to “Slamitude”, contemporary performance poetry — is also included.

However, the most significant of the contributors must surely be Rabearivelo, Rabemananjara and Ranaivo — the so-called “Three Rs” of Madagascar, dominated by Jean-Joseph Rabearivelo (1901-1937), regarded as the first modern African poet in French, saluted by Léopold Senghor, celebrated on his home-island and notable for the poem he wrote on June 22, 1937 recording his suicide by cyanide and concluding, “I swallow a little sugar. I suffocate. I am going to stretch out.”

It is in his poem, Filao, that he writes of his commitment to work that emerges authentically from his indigenous context and the integrity of his experience. He will not import the poetic conventions of Europe.

Stephen Gray has produced a comprehensive anthology which for interested readers will be an enriching introduction to the French-language writers of the African Indian Ocean Islands.