SPENDING about five to seven hours a day playing deadly and often gruesome computer games has paid off for three Pietermaritzburg brothers... 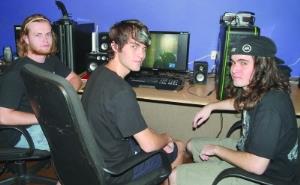 SPENDING about five to seven hours a day playing deadly and often gruesome computer games has paid off for three Pietermaritzburg brothers.

They have been selected to represent South Africa in the upcoming Nations Cup of online gaming and fancy their chances against the best in the world.

Sitting in their home in Oak Park, Helgard (22), Reinhardt (20) and Renier (18) van Rooyen will battle it out against other teams across the globe. The Nations Cup involves teams of eight people and four reserves from around the world participating against other teams, who all link into a common server which hosts a squad-on-squad battle to determine the deadliest warrior.

The competition works on a knockout basis with the winners progressing until they reach the final which has been dominated by the European nations for the past five years with Sweden being the defending champions.

The van Rooyens will be playing Battlefield 3 which is a first person shooter game, similar to the Call of Duty franchise.

They said that they will win because they have superior training.

“We are very confident that we will be the deadliest warriors. We spend between five and seven hours a day playing games, so we think we are one of the best trained teams in the world,” said Helgard, adding that having his brothers on the same team also gives them the edge as they know what each other is doing all the time. Their first assignment will be to guide their team to victory over Finland tomorrow.

Although gaming is a big part of their lives, it does not affect their studies. Renier said Helgard and Reinhardt are both studying degrees in information technology where they achieve top marks and hope to be programmers once qualified.

He added that he is taking a gap year while his family plans a move to Nelspruit. They got their love for gaming from their father, who is also an avid gamer.

“After our dad saw our shared passion, he bought more computers.

“But now I think he is a bit worried that we dominate the computers most of the time and he seldom gets look-in,” said Reinhardt.

When they are not causing devastation in the virtual world, Helgard is an avid golfer while Reinhardt and Renier can be found in the gym, but by their own admission this does not happen too often as their passion borders on addiction.

Although they are confident that they have what it takes to win the tournament, the unpredictability of the other teams is a slight worry.

“Because we have never seen the other teams play before, there is an unpredictability aspect which we need to account for.

“But blood is thicker than water and I am sure the brothers will have the edge,” said Reinhardt jokingly.