OPENING a Christmas present is something many take for granted, but for many pupils at Nobanda Primary School, it is the only gift they get to unwrap in a whole year.... 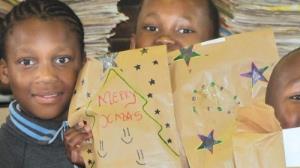 OPENING a Christmas present is something many take for granted, but for many pupils at Nobanda Primary School, it is the only gift they get to unwrap in a whole year.

There were jubilation and smiles all round as pupils tore into their presents to uncover toys and party packs. The gifts were made possible by Grace College pupils, who worked hard all year to raise the money.

Acting principal Thula Shabalala said many of the 750 pupils are orphaned and are raised by their grandparents, who rely on child grants.

Other children have parents who are mostly unemployed and cannot even afford the R50 school fees required for the year.

“I would say only 250 of the 750 learners here pay school fees. So this is very big,”said Shabalala.

“We just don’t have words to express our gratitude. This is evidence that Grace College is committed to underprivileged learners.”

Bernice Mastrooss, the outreach co-ordinator and biology teacher at Grace College, said their pupils raised the funds through cake sales.

“We are here to give to the kids at Nobanda, but really our children are getting more. It’s been a big learning process for them.”

The relationship between Grace College and Nobanda goes beyond party packs.

The college has adopted the school and every two weeks, pupils from grades 8 to 10 spend their afternoons teaching English, art and drama to the children of Nobanda.

“As you know, when pupils get to matric, they are expected to write their exams in English,” said Shabalala.

“But because it is so difficult, some of the pupils drop out. So we felt this would be a meaningful contribution to help learners here improve their mastery of the English language in a fun and exciting way.”

Shabalala said her pupils’ language ability has improved so much that it is positively influencing results.

This partnership has also seen a grade 7 pupil who graduated from Nobanda last year receiving a full scholarship for Grace College this year.”

The school also boasts a newly revamped library after Grace College entered a competition on their behalf, winning Nobanda R5 000.

Grace College is trying to source sponsorship to get stronger burglar guards.