Goals a concern with no Benni 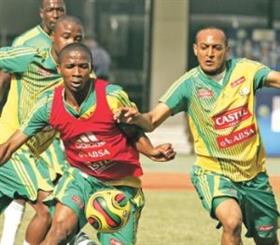 Poor finishing remains the Achilles heel of Bafana Bafana and is the critical concern for the team in their African Cup of Nations opener against Angola at the Tamale Sports Stadium tonight.

The absence of South Africa’s leading scorer, Benni McCarthy, has been explained officially as making room for youngsters, though rumoured to have been the result of a deal with the striker, or his Blackburn Rovers manager Mark Hughes.

Either way, the hope is that Bafana coach Carlos Alberto Parreira will not rue the decision, especially after today’s crucial opener.

Finishing and set pieces have been given special attention, and yesterday showed a marked improvement from the previous session, where the execution was poor.

In the absence of McCarthy, the burden will fall on Sibusiso Zuma to lead the line.

“Well, it does worry me, yes, because to win games you have to score goals,” captain Aaron Mokoena admitted yesterday of South Africa’s finishing. “But the coach has tried to work on that.

“At training you can miss or you can score, but it’s all about the game situation, where we are going to have to convert goals. And I hope these will be three games where we can.”

South Africa play Tunisia in Tamale on Sunday, then Senegal on January 31 in Kumasi. But it is their opener this evening that will set the tone for the tournament.

Bafana, considering their first-round exits in the last two Nations Cups — in Egypt two years ago, without scoring a goal — are the underdogs of the group. All three of the other teams have performed considerably better in world football in recent years.

Angola, the hosts of the 2010 Nations Cup, have shown steady progression since the stability that has resulted from peace in that country after a 24-year civil war. Palancas Negras qualified for the 2006 Nations Cup and Fifa World Cup, and did not disgrace themselves in either.

They possess, in particular, a dangerous striking duo. Flavio, of Egyptian giants Al Ahly, was Angola’s top scorer in the qualifiers for this tournament with five goals, and also scored three times in the 2006 finals, and the team’s lone goal at Germany 2006. Manucho Gonzales was signed by Manchester United in December, having impressed with his speed and agility.

While Parreira’s decision on McCarthy is sure to be questioned if SA do not succeed, the coach’s masterstroke could prove to be his late switch of Aaron Mokoena to defensive midfield, where the captain will be tasked with breaking up the Angolan attacks before they reach the two dangerous forwards.

“Our preparation has been only 16 days, but I think we used it in the best possible way. Our physical fitness was so low, according to the tests, and that is why in Durban we worked on that for eight days.

“We have improved on the technical, tactical and set pieces. And, I would say on the mental side, with team meetings with the players in the hotel, talking about the importance of this competition, especially in this very tough group.

“You cannot say now who will be first or the second [in the group],” Parreira said.

“And If we want to be there I would say every player has to give 10% more.”

The coach has shown a tendency to play his shadow starting XI in training, and it would be a big surprise if he changes his line-up from the one that did duty in Bafana’s first warm-up against Mozambique in Durban 11 days ago.

9 pm SA vs Angola, both live from Ghana.