SARAH Baum and Slade Prestwich were the stand-out performers at the Umhlanga Lizzard Nature Valley Surf Fest at Umhlanga main beach this past weekend ... 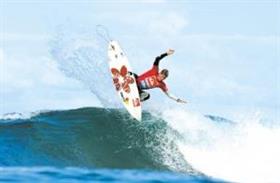 SARAH Baum and Slade Prestwich were the stand-out performers at the Umhlanga Lizzard Nature Valley Surf Fest at Umhlanga main beach this past weekend.

The event launched the 2013 Umhlanga Summer Carnival festivities and was held in suitable two- to three-foot surf with slight northeasterly winds.

This enabled the surfers to turn it on for the crowd and Baum was no exception, consistently posting scores of eight and nine from a possible 10.

She had no trouble in the heats, winning both her divisions — U20 girls and Open Women — and pocketing some useful cash along the way. She took home R2 500 from Nature Valley and another R1 000 from Hurricane for the best surfer at the event.

Scottburgh’s Prestwich was another wave rider who enjoyed a productive weekend. He too won all his divisions — U20 boys and Open Men — and was rewarded with a R20 000 bursary to Varsity College for his U20 win. He earned another R5 000 from the sponsors for his open men’s win. Athlone Park’s Josh Smit got in on the act when he won the “expression session” with a huge “superman” air, getting R1 000 for his effort.

Best up and coming surfer in the U16 divisions was Durban’s Sean Ruggeri, who bagged a custom-made surfboard valued at R3 500.

With the surf and weather playing its part, organisers were thrilled with the event. “Yet again, Umhlanga produced the goods. The weather held out and the waves were great for the surfers,” said Gavin Roberts, media marketing for Lizzard.