THE Harry Gwala Stadium can be fully constructed, complete with the north and south stands, if the Umgungundlovu District Municipality can get additional funds on time, said district municipal manager, Sbu Khuzwayo yesterday. ... 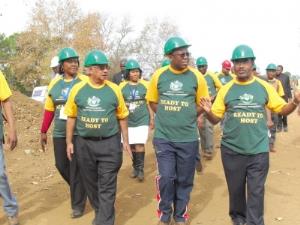 THE Harry Gwala Stadium can be fully constructed, complete with the north and south stands, if the Umgungundlovu District Municipality can get additional funds on time, said district municipal manager, Sbu Khuzwayo yesterday.

But where the additional funds will be sourced, is not yet known.

Briefing MECs for Local Government and Traditional Affairs Willies Mchunu, and Economic Development and Tourism, Mike Mabuyakhulu, as well as District Mayor, Yusuf Bhamjee and Msunduzi Municipality Mayor, Zanele Hlatshwayo about the progress of the stadium on site, Khuzwayo said that to complete the stadium to the design specifications, R120 million was required.

He said that the provincial government had funded R80 million for the project and the District contributed more than R6 million, bringing the total funds available to R86 105 787.84. The contract expenditure to date, said Khuzwayo, is R37 901 611, which amounts to 44% of the total contract value. The stadium is 65% complete in terms of construction progress.

“We are not just building a stadium, but a multi-purpose facility that will have a 250-person function room and private seating,” said Khuzwayo. The stadium, he said, will conform to FIFA regulations when it comes to changing rooms, turf pitch, and an anti-stampede fence surrounding the pitch and goal posts. New entrance gates and paved walkways, secure parking for officials, players and guests, and a secure fencing stadium perimeter will be constructed, said Khuzwayo.

He said that there is no financial maladministration as the funds are still with the department and the construction is continuing.

Mabuyakhulu said that the gratifying progress at the stadium squashed the worries about the District’s capabilities and the District’s working relations with the Msunduzi Municipality, as both the municipalities have collaborated in the stadium’s construction.

The goal was to also see the north and the south stands constructed, said Mabuyakhulu, but funds are not permitting this.

Mabuyakhulu said the stadium will be beneficial to Maritzburg United, who are playing in the Premier Soccer League, as they will now be able to host big teams such as Orlando Pirates.

Mchunu said that the main objective of the stadium is to leave a legacy that the people of the capital city would be proud of.

Hlatshwayo said the two municipalities are committed to completing the stadiums if funds permit. She said, when the funds are available, the north and south stands will be constructed.

Bhamjee said he and Hlatshwayo have been consulting to make the stadium a legacy project. “We will try to get additional funding,” said Bhamjee.