He marches to a different drum 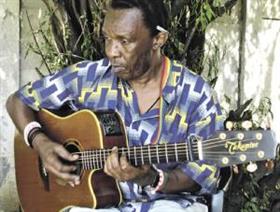 From Madala Kunene’s house in Hillary, you can see the gently sloping hills of Umkhumbane, or Cato Manor as it is also called. It is the place where Kunene was born, and from which, along with the rest of its residents, he was evicted as part of apartheid’s ongoing experiments in “town planning”. Despite the fact that its inhabitants were removed in order to make way for a white settlement, nothing was ever built on Cato Manor until the end of apartheid. From there, the 14-year-old Kunene and his family were moved to kwaMashu. As an adult he lived in Chatsworth for some time, before being persuaded to transfer to the almost leafy, formerly white, working class suburb where I find him on a sweltering Tuesday afternoon.

He is playing guitar in a precious stretch of shade that lingers at the side of his house. He is accompanied by his full band with whom he shares the shade, moving and reforming as it shifts in the afternoon light.

For those who don’t know – and it’s a mark of the unjust nature of media and fame that you might not – Madala Kunene is one of KwaZulu-Natal’s musical giants. Although revered as a master of the strident Maskanda guitar, his infusion of jazz and embrace of broader rhythms has resulted in a sound that resonates in a way that belongs to him and him alone. At the same time, it is a music that perfectly crystallises the musical expression of the Zulu nation.Speaking to Kunene, I am seated next to him on the end of a double bed in a room upstairs in his modest house. Outside, the five handpicked members of Madala’s band continue to practise, the wind instruments prominent in the background and gradually growing louder during the course of our interview.

I first met Madala Kunene at the first Awesome Africa festival in 1999, when it was still also called the Festival of Living Treasures and was awash with millennium money. That gorgeous weekend of music, which showcased some of the finest musicians on the planet, many of them from KwaZulu-Natal, was a demonstration of the kind of musical scene of which Durban is capable.

And inevitably, it points to the failures inherent in our provincial music industry, which is so full of talent that goes largely unheard in favour of mostly vacuous Americana. It is appropriate then, that I ask Kunene if much has changed in the eight years I have known him. But, truth be told, I already know the answer. Not a whole lot. But things are changing, says Madala, just “very slowly”.

His chief concern is that most of his performances take place overseas, instead of on home turf where they should. “We’re not performing too much here at home, or Joburg, or Cape Town,” he says. And while Kunene always returns from an overseas excursion excited by the reception that he received, he is not cut out to be a globe trotter. More to the point, it would be nice if the place that has given birth to his music was also the place that could support it commercially. Sometimes, says Kunene, he thinks that there is no market for the music he makes.

But the big problem for him is his record company, Melt 2 000. Kunene is at pains to point out that Melt owner Robert Trunz is an extremely generous man who has always treated him well. “But the company is not doing well. I must be honest. Melt closed in London. Now Robert is in Pretoria, trying to start it up again. Another element of his continued lack of commercial success is the fact that he doesn’t see himself on what he refers to “the box – these TV things”. Neither is his music heard on the radio. In fact, it’s barely available in the shops, and the dedicated will probably have to buy it on the Internet, most probably from a supplier overseas. As he explains: “In this industry your music must be on the TV and the radio, and then people will know you. If they don’t see you on the TV, they don’t know you.”

There have been times when Kunene has let these things get to him, but these days he is upbeat about the challenges of the industry. He has a show coming up at Sibaya Casino on March 9. The day before I spoke to him, he had played a gig at Spiga D’Oro in Florida Road. “The people enjoyed it, but there weren’t many people there. The owner said to me ‘I’m very sorry Madala, we didn’t advertise.’ But it was nice, I enjoyed it. I think something’s going to happen soon. And I think slowly it will come right. Anyway, I can’t complain. If you always complain it doesn’t help.”

Another thing that is lifting his spirits is the fact that his long-time musical soul mate, Busi Mhlongo, seems to be defeating breast cancer. “I’m very happy. I was visiting sister Busi. Eish, my sister, when I saw her I nearly cried with happiness, because she’s got fat on her bones now. She’s healthy and she’s going back to the work. She kicked it. She’s fine now, and we’re going to work together again.”

He talks as glowingly about his daughter Nomkosi and his son Sibu as any father would. But the glow gets even stronger when he talks about the fact that they are friends at school with a boy called Nico. “He’s their friend. Tomorrow they’ll be married together. Nico Smit and Nomkosi Kunene!” And he laughs joyously. “The past is past. Now we’re going forward. I can’t tell my kids not to play with the boy next door because he’s white. That’s nonsense. It’s another generation. Tomorrow is here.”

•Madala Kunene plays at Sibaya Casino next Friday. He is supported by Ernie Smith.